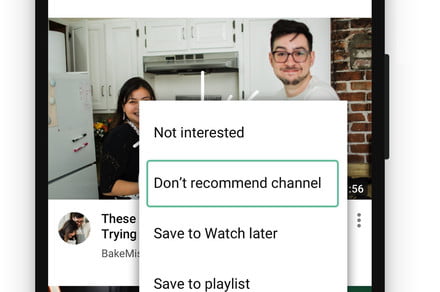 YouTube is truly gargantuan. The stats are insane:  1,300,000,000 users. 300 hours of video uploaded every minute. Almost 5 billion videos watched per day. So when you look at your YouTube homepage and the Up Next videos, you’re really only seeing the teeniest, tiniest slice of all that the platform has to offer. Still, it’s an incredibly important slice, because if you don’t like what you see there, you’ll be less inclined to watch. YouTube is well aware of that fact, which may help explain why it’s making three specific tweaks to these experiences that give you greater control over what shows up.

Instead of just watching more videos from your current channel or random videos, why not dig into content that’s directly related to what you’re watching? Simply scroll to the top of the homepage, or the Up Next list and you’ll see a side-scrolling list of topics. YouTube said the choices might be videos related to the one you’re watching, videos published by the channel you’re watching, or other topics that may be of interest to you.

You’ll need to be signed in on the English version of the Android YouTube app for now, with iOS and desktop coming soon.

Remove suggestions from channels you don’t want to watch

Ever wondered why YouTube keeps pushing some weird channel’s videos at you for seemingly no reason at all? Thankfully you can now do something about it. With “Don’t recommend channel” it’s like being able to ban an artist within Spotify, and it’s dead easy to do: Just tap the three-dot menu next to a video on the homepage or up next, then choose “Don’t recommend channel” — and voilà! No more annoying channels.

Of course, you can still find these channels later if you change your mind.  This works whether you’ve signed in or not, on the YouTube app for Android and iOS today, and will be available on desktop soon.

Learn more about why a video may be suggested to you

On a related note to weird channels, when YouTube picks a video for you that isn’t directly connected to your channel subscriptions, it will let you know why it picked that video. Under these suggested picks, you’ll now see an explanation, like “Digital Trends viewers also liked this channel.” Granted, the choices might not always feel super relevant, but at least you’ll know why YouTube thought so.

You’ll start seeing this feature on the iOS YouTube app today and it’s coming to Android and desktop versions soon.