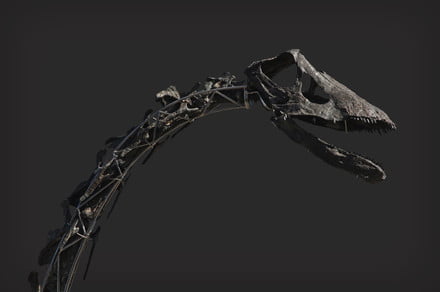 What self-respecting person who was once an 8-year-old kid hasn’t, at one time or another, dreamed of owning their very own genuine dinosaur? Well, so long as you’ve got a couple million bucks to spare, this could be your lucky day — because a bona fide dino skeleton, described as a cousin of the Diplodocus family, is up for auction.

Dinosaur skeletons are, unsurprisingly, not all that common as auction items. This particular skeleton, named “Skinny,” is even rarer than most due to the fact that it’s one of just a handful of sauropod skeletons known to be largely complete. Stretching 42 feet from head to tail tip, the skeleton was discovered and excavated in 2012, before being assembled earlier this year. The successful bidder will receive the exact GPS point where it was discovered, alongside “rare skin imprints” that accompanied the bones.

“The specimen has been studied scientifically and remains to name,” Eric Mickeler, consultant for the French art chamber CECOA, working with the auction house, told Digital Trends. Describing the uniqueness of Skinny, Mickeler answered poetically that, “there are many cars, but few Bugatti,” and “many diamonds, but few diamonds of 200 carats and more. There may indeed be other auctions, but do they have a catalog comparable to mine? The answer is no because this sale is exceptional in the annals.”

Given all of this, it’s no shocker that Skinny will set you back a fair amount of cash. Exactly how much remains to be seen, although the organizers of the Aguttes auction are predicting 1.2 million to 1.8 million euros ($1.35 million – $2 million). The auction, which takes place in France but is open to telephone bids from around the world, will continue through 3 p.m. local time on June 13. In other words, you’ve probably left it a bit late to start saving!

As to how Skinny will then be shipped to the winning buyer, Mickeler said that: “If the reserve price is reached and the sale is formalized, the dinosaur will be disassembled, bone by bone. The skeleton will [then] be stored in [eight] wooden boxes.” From there it will be transported to a secure storage area where it will wait for the buyer to allocate it a new home.

Don’t give up hope of ever getting to see Skinny for yourself, though. Mickeler suggested that it will likely wind up on loan to a museum.