Home News This beautiful map of the sky traces key sources of X-rays as...
News 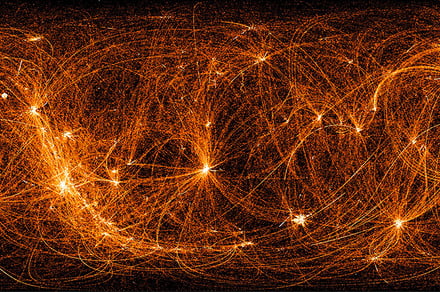 This image of the whole sky shows 22 months of X-ray data recorded by NASA’s Neutron star Interior Composition Explorer (NICER) payload aboard the International Space Station during its nighttime slews between targets. NASA/NICER

This beautiful image was captured by an instrument aboard the International Space Station (ISS), the Neutron star Interior Composition Explorer (NICER). NICER’s primary function is to investigate neutron stars with great precision, using X-rays to measure their dense cores. For it to do this, it has to track sources of X-rays throughout the night sky as the station orbits around the Earth every 93 minutes.

But the instrument continues recording at night after the Sun sets. During this time it moves its focus from one target to the next, gathering data as it goes. And NASA used this extra data to create the X-ray sky map.

The image shows the mapping data gathered over the first 22 months of NICER’s science operations since it was launched in June 2017. It traces the X-ray sources which NICER captures during its night time passes. The brightness of each part of the image corresponds to how much time NICER spends looking in that direction, and the bright arcs between points form because NICER often follows set paths when moving from one target to another. So by looking at the image you can see where NICER looks and how it moves.

NASA has also created a labeled version of the image which shows NICER’s most imaged locations, which correspond to some key landmarks in the sky:

NICER frequently observes targets best suited to its core mission (“mass-radius” pulsars) and those whose regular pulses are ideal for the Station Explorer for X-ray Timing and Navigation Technology (SEXTANT) experiment. One day they could form the basis of a GPS-like system for navigating the solar system. NASA/NICER

“Even with minimal processing, this image reveals the Cygnus Loop, a supernova remnant about 90 light-years across and thought to be 5,000 to 8,000 years old,” Keith Gendreau, the mission’s principal investigator at NASA’s Goddard Space Flight Center in Greenbelt, Maryland, said in a statement. “We’re gradually building up a new X-ray image of the whole sky, and it’s possible NICER’s nighttime sweeps will uncover previously unknown sources.”