Home News This artificial muscle is powered just like the real thing, no battery...
News

This artificial muscle is powered just like the real thing, no battery required 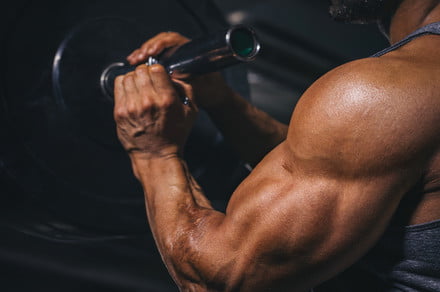 The artificial muscle consists of polymer material, into which the researchers have integrated enzymes. A solution of glucose and oxygen in water powers the polymer actuator, in a similar way as biological muscles. Thor Balkhed/Linköping University

Aside from some impressive robotics tech and a synthetic Austrian accent, what’s the most important component for building a real-life Terminator-style cyborg? Artificial muscles, of course! That’s something that scientists from Germany’s Linköping University have been working toward with an intriguing new research project. Well, sort of.

We’ve previously covered some innovative artificial muscles. What makes this latest project innovative, however, is the fact that it blurs the line between live organism and robot. It does this by running on glucose and oxygen, just like real biological muscles in the human body. That means, significantly, that no batteries are required. It could one day be used to create implantable “muscles” powered by biomolecules in their surroundings.

“Although artificial muscles have been demonstrated for many years now, using different physical principles to drive the actuators, this is the first time such actuators are driven directly from glucose and oxygen, making them much more similar to mammalian muscles,” Edwin Jager, senior lecturer in Sensor and Actuator Systems at Linköping University, told Digital Trends.

The artificial muscle is described more formally as a “polymer actuator.” It’s composed of three layers, with a thin membrane sandwiched between two layers of electroactive polymer. The material on one side of the membrane acquires a positive electrical charge and expels ions, causing it to shrink. While this is happening, the material on the other side picks up a negative electrical charge and gains ions, causing it to expand. This causes the actuator to bend in one direction, much the same way that biological muscles contract.

While this approximate design has been around for some time, what makes this latest demonstration impressive is the fact that it requires no source of voltage to work. It can be powered entirely by immersing the actuator in a solution of glucose in water.

“We envision foremost two application areas,” Jager continued. “[One is] soft microrobotics that can maneuver in the body to deliver a drug cargo or do some minimal invasive surgery. [These could] be powered with glucose from its surroundings, eliminating the need for batteries to drive the microrobots. The other area is autonomously propelled sensor devices for environmental monitoring in lakes and seas. [They could also] harvest the energy needed for their movement from their environment. [However], the latter application would require that we change the enzymes to suit the available biofuels in that environment.”

(No word, then, on building muscular half-man, half-machine robots. But maybe they’re keeping it quiet until it’s ready for launch!)

A paper describing the research was recently published in the journal Advanced Materials.