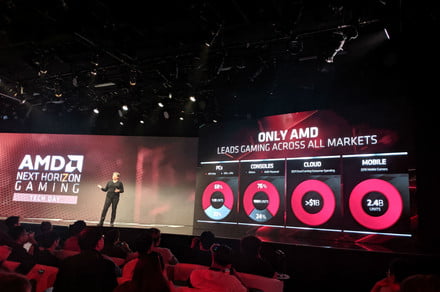 There’s plenty of reason for AMD to be proud of the raw power in its new chips, especially its new 16-core gaming processor. But that’s only a part of the story coming out of the announcements that were made at E3.

When answering the question of why AMD really needed a new gaming chip architecture, it was all about cross-platform functionality. As it turns out, AMD just might be set up to power games across vastly different platforms in this new era of gaming than either Intel or Nvidia.

“Radeon everywhere” is AMD’s new tagline for graphics. That might’ve been an ambitious rallying cry a few years ago, but today, AMD has the chance to fulfill that promise.

When Fortnite landed as a major success on platforms as diverse as mobile, PC, and console, there was a renewed interested in how to sustain a game like that across all platforms simultaneously. AMD built its new graphics architecture on that premise, called RDNA — and it’s all about scalability. A game that performs smooth on a smartphone, gaming PC, and cloud-based game streaming service has to be scalable and efficient.

AMD says its strong catalog of processors and graphics chips makes it a unique fit for these platforms. When a company like Sony or Google runs into issues, it only has one company to interact with. That’s how a company most gamers might not know well can earn an install base of 400 million.

Strangely, AMD’s biggest hurdle may be the PC.

Nvidia and Intel both hold a special place in the mind of the average PC gamer. The weak reception of RTX has provided and AMD an opportunity, but Nvidia still dominates the Steam Hardware Survey. The situation is even more dire in laptops, where AMD has struggled to place Ryzen Mobile chips in systems. It’s not a risk laptop manufacturers are willing to take, so AMD options are limited to budget offerings only.

Still, home console growth is as strong as ever, and the next generation of consoles gives AMD a place to flex. It goes beyond just Playstation and Xbox. Google recently announced that its game streaming system, Stadia, will use custom versions of AMD’s hardware. AMD inked a deal with Samsung to bring Radeon graphics to mobile devices. And AMD’s partnership with Apple may come in handy as Apple’s Project Catalyst brings more iPad games to the Mac.

Because its own brand never did it any favors, AMD leans hard on its collaborators to get its chips into computers — and it seems to be working. Nvidia has taken the opposite route in most of its products, focusing purely on the strength of its own brand to sell services like the GeForce Now game streaming service, or the Shield devices and software.

People may not be buying devices based on the AMD brand, but in the future, they might be gaming on them more than they realize. Earning the mindshare it needs to win over the PC gamer might just be icing on the cake.