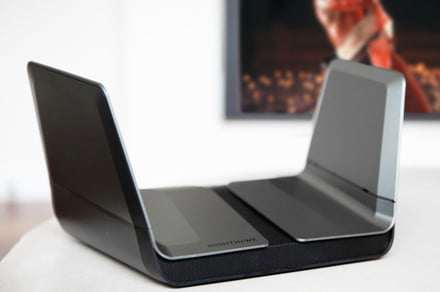 The standard for Wi-Fi routers has been “ac” for years, to indicate the latest protocol and compatibility with all the new mobile devices. Now a brand new standard has appeared, “802.11ax” or “Wi-Fi 6,” which means a whole new crop of routers is here. That’s good news! Wi-Fi 6 promises new speeds, fewer problems, and better security — but you’ll need a new router to access it.

In our reviews of dozens of the latest routers, we’ve kept on eye on new models that are Wi-Fi 6 compatible. Now we’re ready to make some recommendations: Netgear’s Nighthawk AX8 is a great starting place with everything you’d want in a cutting edge router, but be sure to check out our other picks too!

Note: Since Wi-Fi 6 is a new standard, only laptops and smartphones hitting store shelves in 2019 will be able to access those faster speeds.

Netgear has released a whole line of Wi-Fi 6-ready Nighthawks, but the AX8 offers some great middle ground for those who want the best but don’t exactly need an office router. This model promises speeds up to 6Gbps across its bands — yes, Wi-Fi 6 really is that much of an improvement — and is designed for large homes that have a whole lot of devices on the wireless network.

Inside, the 1.8GHz processor helps take care of the details, managing up to 8 simultaneous OFDMA connections and 16 simultaneous Wi-Fi clients while making sure there are no dead zones around. There are also six Gigabit Ethernet ports for file transfer, including the ability to combine two of the ports to create an even faster wired connection.

Asus has a number of Wi-Fi 6 routers, and honestly, we’re impressed with all of them. This particular model has a lot in common with the Nighthawk AX8, offering 6GBps speeds (around 1.15Mbps on the 2.4GHz band and 4.8Mbps on the 5GHz band, the expected speeds on all Wi-Fi 6 models), plus 8 LAN ports. The dual-band router also works with AiMesh, the Asus Wi-Fi mesh system that can link multiple routers together for better, stronger coverage where necessary.

The router also supports both OFDMA and MU-MIMO for direct connections to devices for greater stability and better data streaming. Gamers, meanwhile, will appreciate the Adaptive QoS that can prioritize games to make sure there are no slowdowns that the worst possible time. As with most modern Asus routers, the network is guarded by AiProtection Pro, a security filter to help keep your data safe.

With Netgear and Asus offer top-tier ax models, you know TP-Link can’t be far behind. This Archer model offers up to 6Gbps across its bands, 9 Gigabit LAN ports, and compatibility with both OFDMA and MU-MIMO. By now, all this may be feeling a little familiar. But TP-Link has a few unique features to contribute.

The “band steering” and “airtime fairness” software helps make sure that bands don’t get overcrowded, while also ensuring that one device doesn’t get too much attention. This router also comes with a USB-C 3.0 port, useful for everything from data transfer to charging up your mobile devices — a nice benefit if your router is on your desktop. There’s even Alexa compatibility if you want to give it voice commands.

Primarily interested in gaming? The Rapture is a Wi-Fi 6 model designs for gamers that may not be able to get a wired connection but still want the highest-quality wireless connection available. The router will prioritize gaming devices, gaming servers, and what it identifies as gaming data packets, speeding up the connection from beginning to end.

If you do find an arrangement that allows for a wired connection, there’s a dedicated 2.5G port for gaming devices. AiMesh allows you to connect multiple Asus devices, while AirProtection provides a nice security filter. There are also plenty of options to customize connection monitoring and prioritization so you can check up on the quality of your connections at any time. Oh, and it makes port forward extra, with the ability to pick your game and device and activate open NAT in seconds.

Arris’s router is a mesh tri-band system that comes with a satellite model that allows you to increase the reach and stability of your network, a nice choice for large houses where different rooms (say, a gaming basement and an entertainment living room) may both need reliable Wi-Fi 6 connections — although you can stick with a single unit if you prefer. As with other ax models speeds are a massive improvement from past routers, reaching the expected to 1,200Mbps on the 2.4GHz channel and 4,800Mbps on the 5GHz channels.

The model also comes with 4 Gigabit Ethernet ports and a great Wi-Fi management app for guest networks, parental controls, and anything else you need to set up. The SURFboard mAX is still in development, but you can sign up for updates to learn when it goes on sale.

Don’t let the benign design of the Ruckus R730 fool you: This powerful access point is specifically designed for business up to the enterprise level. This dual-band model supports up to 12 spatial streams and comes with OFDMA and MU-MIMO compatibility, with the ability to handle more than 1,000 different connections.

The access point also includes a 5Gbps port for an extra fast wireless connection. Meshing technology is included to connect to other router devices as necessary.


Facebook
Twitter
Pinterest
WhatsApp
Previous articleWant a good night’s sleep? Delete that sleep tracking app, expert advises
Next articleSet yourself up for a career in IT with this $69 CompTIA training bundle