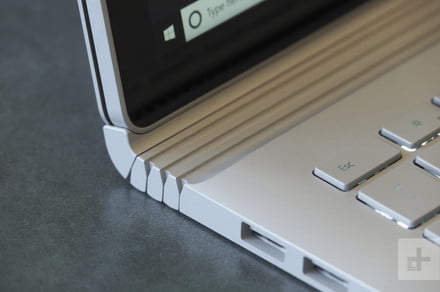 Microsoft’s Surface Book line saw immense improvements with the Book 2 model, but some flaws remained. Now it’s time to start thinking about the Surface Book 3, and what Microsoft has planned. It hasn’t been officially announced, but that hasn’t stopped us from reading between the lines of patents and rumors.

We expect Microsoft to leave the pricing of the Surface Book line largely the same. Right now, the 13.5-inch Book 2 model starts at around $1,200 and the 15-inch model at around $2,500, scaling up to higher prices based on your spec choices. This is already a fairly high baseline, and one Microsoft probably doesn’t want to change if possible. In fact, there are signs that Microsoft wants to make pricing more flexible if possible: The company recently offered new options to buy a 15-inch model without discrete Nvidia graphics, at only $2,000, an acknowledgment that there’s demand for the larger screen at a lower price.

As for a release date, we haven’t heard much of anything to get a good idea. However, the Surface Book 2 came out in late 2017, so it’s not exactly early to expect a Book 3 announcement. Microsoft usually holds a Surface-specific event in the fall, meaning the soonest we could get a Surface Book 3 would be around October.

The Book 2 has a USB-C 3.1 port, which was nice, but it wasn’t enough. Upgrading to a Thunderbolt 3 port would allow for much faster data speeds, and more compatibility with a variety of accessories, especially monitors and external graphics cards. It’s something that’s been missing from the Surface lineup for years now that nearly all of its competitors include. The Surface Pro 6 and Surface Laptop 2, for example, both didn’t even include a USB-C port, despite being released in 2018.

However, Microsoft may have an even better reason to upgrade to Thunderbolt 3: Microsoft continues to encourage interest in the upcoming HoloLens 2 and is working hard to be AR/VR friendly. One of the best ways to do that would be to make its next big laptop model compatible with AR and VR headsets, including the HoloLens, an extremely likely move based on Microsoft’s current interest. However, that requires plenty of power, a strong GPU (more on this later), and a connection as powerful as Thunderbolt 3.

Upgrading to a more powerful Nvidia GPU makes a whole lot of sense for Microsoft’s adjacent goals. The Surface Book 2 included several nods to Xbox players, including easy wireless controller support and an increased focus on Play Anywhere titles. But to really make the Surface Book 3 a gaming device, an upgrade to faster Nvidia graphics would be the ideal change. If Microsoft really does want people to play AR/VR content from the Surface Book, then upgrading the GPU is necessary to support the headsets people will be using.

The issue here is that moving to a full Nvidia GPU is one of the things that’s likely to increase the already-steep price of the Surface Book line, something that Microsoft may be loath to do. The other issue is the thermals. Microsoft would have to take a serious step forward in cooling if it hopes to make the Surface Book 3 a serious option for creative professionals.

The Surface Book 2 offered up to 1TB of SSD storage and up to 16GB of RAM. This is fine! In fact, it’s great for most tasks that you’d want to use the laptop for, from work to play. However, this is one area Microsoft may want to push for the Book 3. RAM could especially use a higher-tier option if Microsoft wants to advertise it as a VR-ready device. While 1TB of data is all people are likely to need, we are seeing some professional laptops — such as some of HP’s Spectre models—go beyond this to offer even more storage. Microsoft may be interested in imitating this move.

Intel’s Ice Lake processors are arriving 2019, and they’re specifically made with tomorrow’s 2-in-1 computers in mind. If Microsoft is planning on a 2020 release for the Surface Book 3, it makes a whole lot of sense to adopt Intel’s Ice Lake chips to increase processor power for the high-end Surface Book specs.

If the Book 3 is going to be released before this is an option, then Microsoft will likely use the older Whiskey Lake processors, which isn’t as exciting, although they are perfectly fine CPUs for the job. Microsoft has often chosen the safer route with its processor updates, so we’d be surprised to see the company be one of the first to implement these 10nm processors.

The Surface Pen makes an excellent companion to the Surface Book series if you plan on drawing or doodling — and this is another device that Microsoft is working to improve.

Patent reports show a couple of different enhancements that Microsoft could make. One of them would actually let the touchscreen sense where the Pen was about to touch and enhance sensitivity to that area. Other, older patents indicate that Microsoft has even worked on an OLED touchbar on the Pen to quickly shift settings and control apps that you are interacting with.