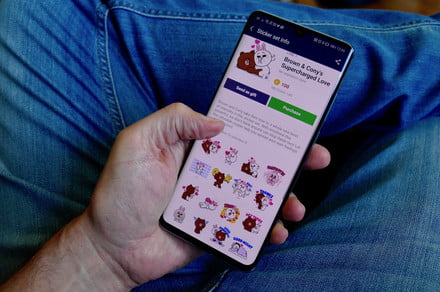 Stickers in messaging apps are very popular. Whether it’s a simple emoji, a Pusheen cat sticker in Facebook Messenger, or an Animoji in iMessage, stickers are a fun and often cute way of displaying an emotion. The heritage of all these can be traced back to Line’s use of stickers, or stamps as they’re also known, in its messaging app. Now, Line has announced the ultimate option for the sticker-obsessed: Stickers Premium.

Seeing as you already pay a nominal amount to own most high profile stickers in Line, what does this mean? It’s a subscription service, where for a small monthly fee you get unlimited use of all the stickers available through the Line sticker store. How many stickers is that? More than 3 million sets, says Line, which in addition to estimating the number of stickers you’ll be able to use, it also breaks down the benefit of Stickers Premium into a monetary value.

The subscription price is 240 yen per month in Japan (international pricing and availability have not been confirmed yet), which is around $2.20, and for this, you get instant access to stickers with a combined value of 380 million yen. Yes, buying enough tokens to obtain all the stickers Line offers would cost you a little over $3.5 million. It’s hard to argue against value like that.

Other messaging apps have followed Line’s example by introducing stickers, including Messenger, WhatsApp, and WeChat. Stickers are either free or available in packages for a small single fee. It’s entirely possible Line’s Stickers Premium subscription service will start a similar trend throughout the messaging app industry.

Stickers Premium has been announced at the Line Conference in Japan, where the company has also spoken about an interesting twist on another established service — music streaming. The Line Music platform is home to 54 million songs and has 11 million people listening each month. Coming soon is a feature currently known as One Play, where you will be able to listen to any registered track on Line Music once, for free. There won’t be a time limit on listening again either, but presumably, you’ll be limited to listening to a different song unless you subscribe. It’s an interesting approach to helping people share new music, and for non-subscribers to listen.

Line will launch Stickers Premium in July, but has not stated whether the subscription system will be available outside Japan. Line Music’s One Play will arrive in the fall.