Samsung could launch a clamshell-style foldable phone in 2020, report says 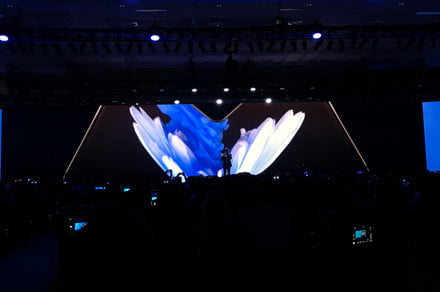 The Samsung Galaxy Fold may not have been much of a success right off the bat, but it looks like Samsung isn’t giving up on the foldable phone concept. In fact, while the company attempts to fix display issues and fulfill pre-orders of the original Galaxy Fold, a new report suggests that it’s already working on a second foldable phone — one that will have a clamshell design.

The report comes from Korean publication ET News, which has a history of reporting on Korean companies like Samsung and LG. According to the report, production on the new phone will begin in November of this year, and the device will launch in the first half of 2020.

The new device will reportedly sport a 6.7-inch display, which is the same display size as the Samsung Galaxy S10 5G. Not only that, but it will also fold vertically in the middle — making for a device that can easily fit in your pocket or a bag. The form factor will also help protect the device’s screen against scratches and bumps.

Of course, Samsung isn’t the only company expected to be working on a device with a clamshell-like design. Motorola is rumored to be working on a foldable device that will revive the Razr brand. There’s no specific release date for the new Razr phone just yet, but some reports indicate that the device could launch as soon as this summer.

The news isn’t all that surprising, despite the fact that Samsung has had a rocky road to the launch of its first foldable device, the Samsung Galaxy Fold. The Galaxy Fold launched earlier this year, with reviewers quickly determining that the device had multiple issues with the display. This prompted Samsung to ask for review units back and delay the consumer launch of the phone. Samsung has yet to announce a new shipping date for pre-ordered phones.

Still, considering the money and time that Samsung has poured into developing a foldable phone, we expect the company to continue to attempt to perfect this type of phone — even if it ends up taking the company a few more years.