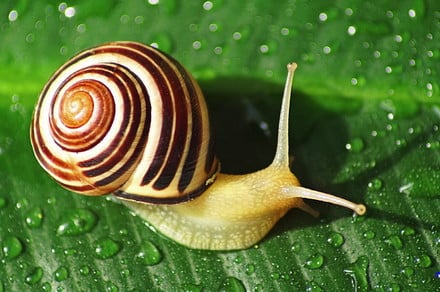 Whether it’s robots modeled on cockroaches or medical adhesives derived from Chinese giant salamander excretions, the tech and scientific communities love nothing more than finding unique ways to repurpose the natural world. The latest example of this? A team of international researchers, hailing from the University of Pennsylvania, Lehigh University, and the Korea Institute of Science and Technology, who have developed a new type of snail mucus-inspired super glue. Unlike ordinary glues, however, this type of super glue-like material can be easily reversed. That means that it can easily switch between being an ultra strong adhesive and an unglued state.

“In our daily life, we use adhesives in many occasions,” Shu Yang, professor of Materials Science and Engineering and Chemical and Biomolecular Engineering at the University of Pennsylvania, told Digital Trends. “We have a choice of using glue, which is liquid and permanent after cure and could be messy to apply, or tape, which is neater, flat, but less strong in adhesion strength. While glue offers stronger adhesion, once applied if we made a mistake or it’s not perfectly aligned, we cannot take the glued object apart and redo it. Think of a car assembly, an expensive art piece, a computer chip, or holding a microwave on a wall. If we use a scotch tape, we could remove it and reapply, but it’s because it doesn’t stick to the substrate very [strongly as] there is no chemical reaction.”

The material developed by the researchers is inspired by the mucus secretion made by snails. This allows them to stick to rough surfaces such as rocks, but also easily unattach themselves when needed. The team has created a gel which, when hydrated, conforms to the surface and then adheres as it dries. This effect is reversible.

Yang suggests that the super strong reversible adhesive could be useful for everything from transferring heavy objects (picking them up and dropping them off, without damage, simply by rehydrating and dehydrating the material) to chip manufacturing to wall climbing. In other words, if you’ve ever dreamed of being Spider-Man (or, perhaps, Snail-Man) this could be your lucky day!

“We have filed a patent on this and would love to work with someone to commercialize it,” Yang said. “I see the impact of scientific research [as being to] bring knowledge to benefit our daily life.”

A paper describing the work was recently published in the journal Proceedings of the National Academy of Sciences.