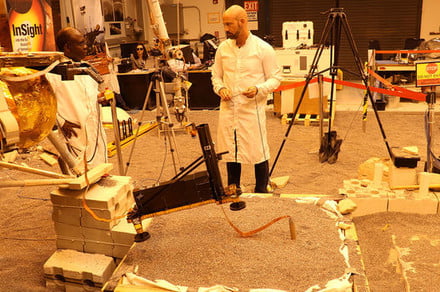 NASA’s InSight lander is facing some challenges as it investigates the Red Planet. Earlier this year it deployed its drilling instrument, the Heat Flow and Physical Properties Package (HP3) to learn about temperature variations within the Martian soil. But a part of the instrument called the mole got stuck while drilling several months ago.

Since then scientists have been trying to figure out what caused the problem and what to do next. They believe the mole is stuck because there is not enough friction in the soil. In other areas of Mars, the friction in the soil is higher, so the mole was designed to let loose soil flow around it and hold it in place. But in this particular area, they think the soil may have become compacted and created a gap around the mole. The mole therefore has nothing to grab onto and can’t move.

Alternatively, the mole could have hit a rock and gotten stuck.

The self-hammering mole, part of the Heat Flow and Physical Properties Package (HP3) on NASA’s InSight lander, was only partially buried in the soil of Mars as of early June 2019, as shown in this illustration. NASA/JPL-Caltech/DLR

The proposed solution is to move the mole’s support structure. If the mole can be moved, this could potentially solve either problem.

If the mole has just hit a small rock, moving to another area will allow it to dig again. And if the problem is the low density soil, then InSight could use its arm to compact the soil before digging begins to create more friction. “Moving the support structure will give the team a better idea of what’s happening,” HP3 Principal Investigator Tilman Spohn of the German Aerospace Center (DLR) explained in a statement. “But it could also let us test a possible solution. We plan to use InSight’s robotic arm to press on the ground. Our calculations have shown this should add friction to the soil near the mole.”

However, the plan does have risks. The mole will stay in place while the support structure is moved around it in three steps over the course of a week. Then it comes time to move the mole itself. Once the mole is taken out of the soil, it may not be possible to get it back in.

The team hopes to start moving the support structure by the end of June and to have the mole in its new position by mid-July. For more information, the InSight team has answered questions about their efforts to save the mole on NASA’s website.