Home News Microsoft xCloud vs. Shadow: Which one will be worth your hard-earned money?
News

Microsoft xCloud vs. Shadow: Which one will be worth your hard-earned money? 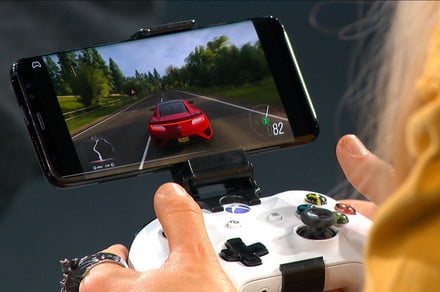 As Steam and the Epic Games Store continue to battle for the PC digital marketplace, a new competition is brewing in the PC gaming space: Game streaming. Microsoft’s Project xCloud service will likely be a huge player in this new gaming frontier, but it will have no shortage of competitors, including Shadow. The game streaming service from French company Blade is already available today. Both services have the same general concept: The ability to play intensive, high-end games on low-powered hardware. They aren’t exactly the same, though, so we decided to take a detailed look at Microsoft xCloud vs. Shadow to help you decide between the two.

Microsoft xCloud and Shadow both offer versatility as far as where you can play your games. Microsoft xCloud is designed to complement an Xbox One or PC. But it could also replace the need for an Xbox console or high-end PC gaming rig if you’re willing to sacrifice some performance. As such, you will be able to use the service on an Xbox One, PC, or mobile device, including tablets and smartphones (iOS and Android). Microsoft’s Azure servers let users harness the power of the Cloud to play intensive games on both capable devices and devices that otherwise wouldn’t offer support. For instance, xCloud will let users play Microsoft exclusives on smartphones for the first time.

Shadow offers similar, robust compatibility. As of now, you can stream games on PC, Mac, Android, iOS, and Linux. Set up a bit differently than xCloud, Shadow gives users remote access to a high-end PC rig through the Shadow app. From there, users set up their Windows profile and download the applications they desire. You need the following software versions or later to use the Shadow app:

Shadow streaming can also be used on your TV if you purchase the Shadow Ghost ($150), a stylish piece of hardware that isn’t required but could be worthwhile for those who want to game on a larger screen. The Shadow Ghost has Wi-Fi and Bluetooth support, along with HDMI, Ethernet, two USB 3.0 ports, and a 3.5 mm audio in/out jack.

Both services let you switch on the fly between platforms in a matter of seconds. So you could start playing on PC and then switch over to your smartphone as you walk out the door.

As a Microsoft product, it’s no surprise the main controller option for xCloud will be the Xbox One gamepad. Xbox One wireless gamepads will work with all supported devices, provided that the device has Bluetooth and your Xbox One controller was manufactured after 2016. Presumably wired gamepads will also work with PC. Considering xCloud supports PC games, we imagine mouse and keyboard support will be available, but Microsoft hasn’t confirmed that detail yet. On mobile devices, touchscreen controls will be available and will be custom tailored to fit the game.

Shadow supports numerous control methods, including mouse and keyboard, DualShock 4, and Xbox One controllers. It also supports other wired/wireless controllers that work with your devices, though PS4/Xbox One gamepads are probably the best options for most users.

Streaming quality is arguably the most important factor to consider. No one wants to subscribe to a service that doesn’t offer games that look great and run well. While you cannot expect streaming services to support an identical experience as you’d get gaming on local hardware, you still want an experience that’s worth the price of admission.

Microsoft hasn’t fully unveiled xCloud yet, but we know it will use Microsoft’s Azure servers for its power. We expect to learn more details about streaming quality at E3 2019, including required internet speed to stream. We do know, however, that Microsoft isn’t looking to mirror the console experience. A blog post discussing xCloud stated that the streaming service isn’t designed to replace an Xbox One “connected to a 4K TV with full HDR support and surround sound.” The phrasing of that statement is interesting. Does that mean that xCloud won’t support 4K or HDR? It’s too early to say, but Microsoft understandably doesn’t want to undercut its console business with xCloud.

The remote computer you access is a Windows 10 PC with beefy specs: Eight-thread Intel Xeon CPU, Nvidia Quadro P5000/GTX 1080 GPU, 12GB of RAM, and a 256 GB SSD. Shadow is optimized for a 15 Mbps internet speed and works via your home internet setup or 4G LTE. The solid-state drive will fill up rather quickly when downloading AAA games, but with download speeds of 1GB/s, you can install even the largest game file sizes in around a minute.

Microsoft xCloud and Shadow differ on which games they support, though both feature massive libraries. Microsoft created xCloud to complement the Xbox One, and as such, Microsoft will let users play any of the more than 3,000 Xbox One games with xCloud. Additionally, PC titles released by Microsoft will also be supported. Since the next Xbox is also expected to release by the end of 2020, you can expect that library to grow to include next-generation Xbox titles. In short, xCloud’s library will be staggeringly vast. What’s unclear is how Microsoft will offer these games to subscribers — whether some or all will be included with the subscription price or if you have to buy/rent individual games on top of the subscription price.

Shadow, meanwhile, revolves around what you own. Since you have remote access to a high-powered rig, you can download Steam, the Epic Games Store, and other clients and install your personal library of games. Critically, you do have to purchase games in addition to the subscription price. But this also means that you have access to thousands upon thousands of PC games — as long as you pay for them first.

Microsoft xCloud is all about constant access to the Xbox library, whether you’re at home gaming on an actual Xbox One, sitting at your desk on PC, or out of the house on mobile devices. The main goal with xCloud is to sync your experience across all of your devices. You can start a race in Forza Horizon 4 at home, and finish it as you walk out the door. Most of the time, you’ll be able to keep using your Xbox One controller regardless of device. Microsoft will likely outline additional features at E3 2019, but it will use similar cross-save technology seen in the Xbox Play Anywhere program.

Available already, Shadow offers a unique experience amongst all of the announced game streaming services thus far. As mentioned, Shadow is actually a cloud computing service designed specifically with gamers in mind. With the Shadow app, you gain access to a remote PC. The servers partition a portion of a rig for you to use. Though each time you log on, you won’t necessarily be drawing from the same source. Your user experience won’t change, though. You can customize your experience rather extensively.

The first time you access Shadow, you will be greeted with the standard Windows 10 setup. From there, you can choose which apps to install. While Shadow is definitely aimed at gamers, you can also use the service for non-gaming functions that may require more processing power than your local devices can handle. One of the main draws of Shadow is its Mac support, which gives Apple users access to a much wider library of games without having to run Bootcamp or Parallels. Like xCloud, Shadow stays with you whether you’re at home or on the go, allowing you to pick up right where you left off on a different device.

Microsoft’s xCloud service isn’t available just yet. A public beta trial will be held later this year. In terms of pricing, we expect Microsoft to announce specific details at E3 2019. As a ballpark estimate, Xbox Game Pass Ultimate costs $15 per month and gives users access to Xbox Live online services and Xbox Game Pass. A similar subscription model may be used for xCloud.

If Microsoft only requires a subscription for access to the entire 3,00o-plus game library, we imagine it will be priced at least a bit higher. For reference, PlayStation Now costs $20/month and grants access to more than 750 games. It’ll be interesting to see how the pricing model stacks up to other upcoming streaming services like Google Stadia.

Shadow is available now in 38 states (click here for availability). You can try Shadow for ten days for $10. Following the trial, you can choose between two subscription models. An annual plan costs $25/month ($300/year). If you choose to subscribe monthly, you’ll pay $35/month ($420/year). You can also spend an additional $150 on the Shadow Ghost if you want to game on your TV. The subscription price doesn’t include the cost of games, all of which you have to buy separately.