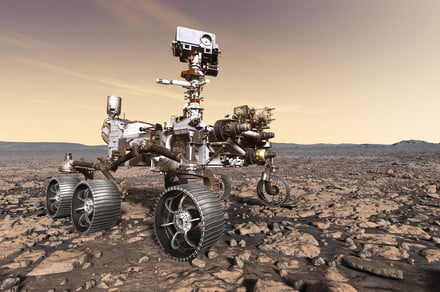 Could there be a bigger brag in the schoolyard (or, heck, any place) than laying claim to the fact that you named the next Mars rover? That’s exactly what NASA is promising K-12 students in the U.S. by launching a new contest that will allow some lucky, lucky student to name what could be humanity’s next great technological achievement.

“We’re very excited about this exceptional partnership,” said George Tahu, Mars 2020 program executive in NASA’s Planetary Science Division at the agency’s Headquarters in Washington, in a statement. “Contests like this present excellent opportunities to invite young students and educators to be a part of this journey to understand the possibilities for life beyond Earth and to advance new capabilities in exploration technology.”

The contest will officially open to students in the fall of 2019. That’s less than a year before the targeted July 2020 launch date for the next Martian rover. The rover is expected to touch down on the Red Planet in February 2021. Once there, it will search for signs of past microbial life, collect rock samples for a future return to Earth, and conduct tests of the planet’s climate and geology.

If you’re out of the K-12 age bracket, however, don’t be too downhearted. NASA is also looking for volunteers who can help judge what will likely be tens of thousands of contest entries. This is open to any U.S. residents willing to give up around five hours of time to review the student-submitted names. To get involved, head over to the Future Engineers website, where you can register your interest to be a judge.

If you want to get even more involved, there’s also the opportunity to send your name to Mars as an engraving on a silicon chip that will be sent with the 2020 Mars rover. Everyone who signs up (there’s no age limit) will receive a souvenir boarding pass for their efforts. An image of the final chip will be put on the Mars 2020 “Send Your Name to Mars” homepage.

This is another part of NASA’s public outreach mission to get people engaged with the pioneering work that it carries out.