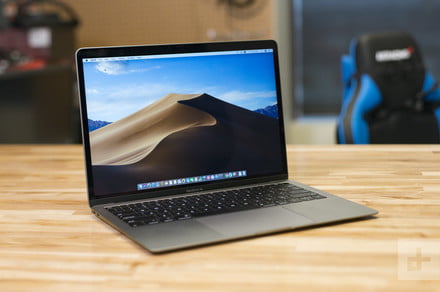 If you’re in the market for a portable Apple device that still packs plenty of power without emptying your bank account, there are two products that need to be on your shortlist: The MacBook Air and the iPad Pro.

At first it may seem like an odd comparison, but there are actually a lot of compelling reasons why you should consider each of them. Let’s see which comes out on top.

Let’s start with the MacBook Air, which was completely redesigned in 2018. Previously, Apple had used the “Air” moniker to denote its thinnest, lightest products, but the 2018 revamp saw the MacBook Air occupy the mid-range slot in Apple’s lineup.

Its all-metal chassis retains the classic Air wedge shape and comes in a 13.3-inch size and silver, space gray and gold finishes. The MacBook Air weighs in at 2.75 pounds — more than the 2.03 pounds 12-inch MacBook, but less than the 13-inch MacBook Pro’s 3.02 pounds. It’s still more than portable enough to take with you on the go, but it’s no longer the slimmest laptop on offer from Apple.

Elsewhere, the MacBook Air has two Thunderbolt 3 ports (using the USB-C form factor) that support incredibly fast transfer speeds of up to 40Gbps. You can equip the MacBook Air with an 8th-gen Intel Core i5 processor, up to 1.5 TB of storage and 16GB of memory.

The iPad Pro also underwent a wide-ranging redesign in 2018. It now comes with a flat-edged chassis and 11-inch and 12.9-inch sizes. As for colors, you can pick one up in either silver or space gray. You get a 12-megapixel camera on the back, and can hook up various accessories (such as external keyboards) using the Smart Connector.

Customization options on the iPad Pro are a little more limited than those on the MacBook Air. SSD options range from 64GB to 1TB of flash storage, while you can choose to add cellular functionality in addition to the iPad Pro’s Wi-Fi connectivity.

There’s a USB-C port for charging and data transfer, plus four microphones to clearly pick up sound input. You also get stereo speakers, which really are impressive when sitting down to watch a movie. Both are beautifully-designed devices, but there’s no question which is more modern. The iPad Pro is more portable and has thinned tiny bezels, while the MacBook Air hasn’t made moves in those areas.

What the MacBook Air has lost in svelteness, it’s gained in other ways. One such upgrade over its old design is the introduction of a 2,560 x 1,600 resolution Retina display with slim bezels. Before 2018, the MacBook Air was the last Apple laptop to be without a Retina screen, and it really showed, making it a poor purchase choice.

While we noted its IPS display’s color accuracy was excellent in our review, its brightness was a tad disappointing, and it lacks Apple’s excellent True Tone tech to match white balance to the ambient light of your surroundings.

Aside from the Retina display, the MacBook Air’s redesign brought with it a host of new features. It now has the same third-generation Butterfly keyboard as Apple’s other laptops, complete with large keys and low travel. This comes with a thin membrane underneath each key cap, the result of which is a quieter typing experience. It is also thought that this membrane is to prevent dust getting under the keys and causing typing issues, although Apple has never officially confirmed this.

Another first for the MacBook Air is its large trackpad. This uses haptic feedback to simulate trackpad presses and works with a large number of gestures in MacOS. Apple’s trackpads are the best you can get in any laptop, so you won’t be disappointed with the one in the MacBook Air.

One of the iPad Pro’s main selling points is undoubtedly its display; we called it “fantastic for consuming and creating content” in our review. It uses the same Liquid Retina tech as Apple’s iPhone XR and comes in at a 2,388 x 1,668 resolution. It has the same True Tone technology as the MacBook Air, making it easy on your eyes in any situation.

We also love the iPad Pro display’s ProMotion feature. This dynamically changes the refresh rate up to a maximum of 120Hz, meaning you always get a smooth experience, whether you’re scrolling through a document or drawing with the Apple Pencil.

Speaking of the Apple Pencil, this was also redesigned alongside the new iPad Pro. It now has a flat edge so it can magnetically charge on the side of the iPad Pro, and comes in an attractive matte finish.

When we reviewed the iPad Pro and tested its processor capability in Geekbench 4, it scored 5,029 for single-core and 18,042 for multi-core performance. In comparison, the MacBook Air’s single-core and multi-core scores were 4,233 and 7,773 respectively. That the iPad Pro comfortable beats one of Apple’s newest MacBooks — especially in terms of multi-core performance — is quite incredible. Even if measuring Geekbench across different platforms isn’t quite akin to comparing apples-to-apples, the comparison feels true just when using the two devices anecdotally.

Still, it’s not an open-and-shut case. The MacBook Pro’s Thunderbolt 3 ports mean you can hook up an external graphics card if you want, which will drastically improve its graphics performance. Barring quick and dirty edits, the keyboard and trackpad of the MacBook Air also make intensive tasks like video- or photo-editing significantly easier than on the iPad Pro.

There’s also the operating system to consider. The MacBook Air runs on MacOS, which is an established system with plenty of powerful apps like Adobe Premiere. In contrast, the iPad Pro’s iPadOS has only just been spun out from iOS. While it has a bevy of powerful apps at its disposal, the power and organisation of MacOS makes it more suited to heavy-duty tasks.

Conclusion — the MacBook Air edges ahead

Given their similar price points and differing form factors, it can seem tricky to pick a winner between the MacBook Air and iPad Pro. But in this case, we feel the MacBook Air just edges it.

That’s down to a number of reasons. While the iPad Pro is incredibly powerful and perfect if you want a superb tablet for drawing and working on the go, its lack of flexibility can hold it back. Internally, you can only really customize its storage; the MacBook Air, on the other hand, gives you choices over storage and memory, while its Thunderbolt 3 ports mean you can greatly expand its capabilities if you need to.

The MacBook Air’s more powerful operating system and compatibility with some of the world’s top pro apps is also a strong selling point, as is its superb trackpad. Those tools make it well-suited to detailed work such as video-editing, which is easier to do than on a touch screen like that of the iPad Pro.

So, while we love the iPad Pro — it’s the best tablet money can buy — the MacBook Air is the device most people should buy if they’re looking for an Apple product at this price.

Facebook
Twitter
Pinterest
WhatsApp
Previous articleSpaceX’s Starlink satellites are in position and ready to begin testing
Next articleThe Honor 20 is a great phone, but it lives in the shadow of its siblings