HTC’s Vive Pro Eye, a $1,600 VR headset with eye-tracking, is all business 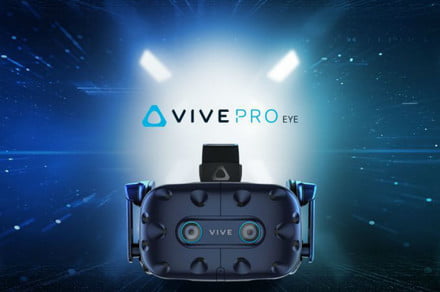 On the surface, the Vive Pro Eye looks like it could be yet another VR headset geared toward gamers. And yet, even after being given a summer release date (June 6) in the United States, and therefore more time to add gamer-friendly features, it seems HTC is doubling down on its original intent to launch the Vive Pro Eye with an emphasis on business and commercial use.

In fact, the Vive Pro Eye’s most prominent feature is it’s “precision eye-tracking technology,” which HTC asserts would be especially helpful for businesses looking to enhance product simulations in an effort to better understand what their customers see and experience.

Other features of the Vive Pro Eye headset include heat-mapping, foveated rendering, “gaze-oriented menu navigation,” and virtual collaboration enhancements. The Vive Pro Eye’s heat-mapping feature allows businesses to track the locations of their users’ gaze as they interact in a given simulation.

In our hands-on review of the HTC Vive Pro Eye headset, we particularly took note of HTC’s implementation of foveated rendering, a visualization technique that enhances the resolution of what a user is looking at, while providing less resolution to everything else outside of the user’s direct line of sight. Digital Trends staff found the experience of foveated rendering impressive, but still felt its commercial use was “a little creepy.”

While the “gaze-oriented menu navigation” feature could be useful for gamers who’d rather eschew the use of handheld controllers, the Vive Pro Eye still maintains its focus on enterprise use with its virtual collaboration enhancements, specifically its ability to capture and reflect nonverbal facial cues such as eye movements and blinks in users’ virtual avatars. HTC’s website says that this particular feature could be useful in “conferences, chat groups, and remote collaboration” settings.

The Vive Pro Eye VR headset also includes a dual OLED screen, a resolution of 1,440 x 1,600 pixels per eye, a 110-degree field of view, and a refresh rate of 90 Hz. If you’re planning on purchasing one for yourself, it’s important to note that you’ll need to meet certain computer specifications, including either an Intel Core i5-4590 processor or better or an AMD FX 8350 processor or better, and an operating system of Windows 7 or later.

The HTC Vive Pro Eye VR headset is now available for purchase in the U.S. via the HTC Store and costs $1,600.