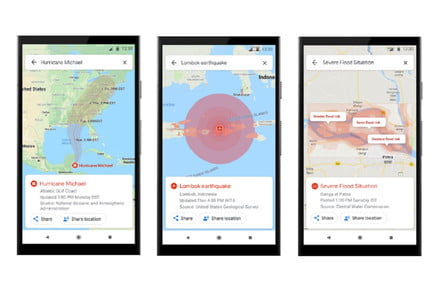 Google has announced a Google Maps update will make the app even more useful when there is a natural disaster, while another helpful feature has been spotted by users.

Google said in a blog post that the SOS alerts feature of Google Maps was improved by adding visual information during natural disasters, with a new navigation warning system to lead users away from danger.

Google Maps’ SOS alerts already provide a summary of whatever is happening, the relevant news stories for an incident, emergency phone numbers and websites, and updates from local authorities. With the new update, the app will now also show detailed visualizations about hurricanes, earthquakes, and floods.

A crisis notification card will automatically appear in the days before a hurricane hits, for those who are living near the expected impact area. The card links to a hurricane forecast cone, which shows predictions on the trajectory of the storm and the time that it is expected to hit locations.

The cards for earthquakes, meanwhile, will display the shakemap, or the epicenter and magnitude with a color-coded visualization to show how intense the shaking was in certain areas. For floods, forecasts will show where they are likely to occur and the expected severity in some locales, though the feature is only available in India for now.

Google Maps will further expand its disaster-related features in the summer, with the plan to roll out notifications when a person’s route is affected by a crisis activity. The app will also try to lead the person away from the incident by providing instructions on where to go.

While Google Maps announced its expansion of SOS alerts to include disaster-related notifications, another new feature for the app was added without much fanfare. Android Police reported that some users have started seeing an option to display a speedometer while driving.

The speedometer, which may be turned on through the app’s preferences under Navigation Settings, complements last week’s worldwide rollout of speed cameras and speed limits in Google Maps that further likens the app to Waze.

Google Maps users will also have a new augmented reality mode to look forward to. The feature, which was first showcased in last year’s Google I/O and currently in testing, will utilize the smartphone’s camera to help determine exactly where they are, instead of having to orient themselves through the little blue dot.