Drone delivery services may prove too noisy for some in Australia 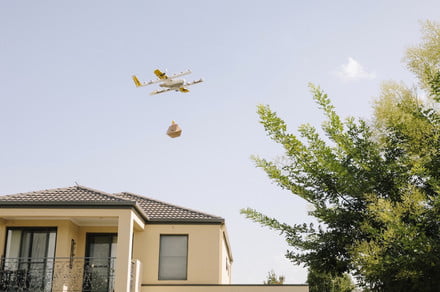 Hardly a week seems to go by without some foodstuff — whether it’s meatballs, pizza, or donuts — playing a starring role in a test run of a new drone delivery service.

Ever since Amazon unveiled the first version of its Prime Air drone in 2013, other companies big and small have been developing similar flying machines, many geared toward delivering goods to customers’ homes.

While many of these companies promise a future of fast deliveries enabled by these small autonomous aircraft, a myriad of obstacles still need to be overcome before full-fledged, wide-scale services can become a reality.

While much of the focus is understandably on the need to create a system that is both safe and reliable, there seems to be one issue that is often overlooked when it comes to drone delivery — that of noise.

But it’s a problem that lawmakers in Australia are now keen to look into.

A statement this week from the nation’s deputy prime minister, Michael McCormack, said that it now wants to address the matter as large-scale commercial drone operations edge ever closer, ABC reported.

The government’s move follows the recent launch of a drone delivery service operated by Google sister company Wing in a suburb of Canberra, the Australian capital. During the trial phase last year, some local residents were unhappy about the noise made by the drones as they flew overhead. One resident described the racket as like “a chain saw gone ballistic,” while others said they used their yard less often because of the intermittent noise. Some annoyed locals even formed a protest group to fight against “noisy, intrusive, unnecessary drones.”

Keen to examine the issue more closely, the Australian government said that it plans to conduct a formal review “to determine the appropriate scope and breadth of future noise regulation” regarding drones, which could affect the launch of future drone-based services until makers are able to create quieter machines.

The review will consider “the community noise impact of drone operations, the size, frequency, and nature of drone operations (recreational and commercial), and existing safety regulations” administered by the Civil Aviation Safety Authority, Australia’s equivalent of the FAA.

It will also look at state and territory regulations that cover noise from equipment operating in urban areas, and examine current efforts in the drone industry to reduce noise through improved drone design and methods such as varying a drone’s flight path.

Wing’s Canberra service launched officially in April and currently involves around 100 homes across several neighborhoods. Customers can use an app to order a selection of items offered by different  businesses, including fresh food, drinks from coffee shops, and over-the-counter medicines.

Once an order has been placed, one of Wing’s delivery drones flies to the customer’s home, hovers in the sky, and lowers the order into the yard via a tether.

As more companies launch trial delivery services using drones, we’ll be able to learn more about how residents in different communities respond to noise and safety issues, though technological advances will hopefully pave the way for quieter drones before too long.

Garmin Lily review: This wearable for women has all the basics