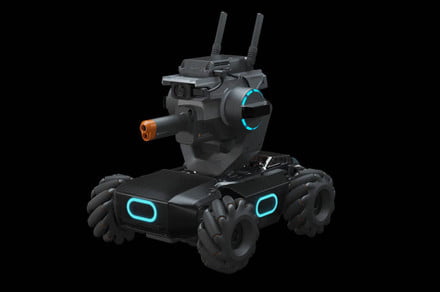 Not content with dominating the drone market and even taking on action-cam specialist GoPro with its own box of tricks, DJI is now turning its attention to the world of educational robots with the RoboMaster S1.

Launched on Tuesday, the modular RoboMaster S1 — short for Step 1 — is aimed primarily at children as a way to introduce them to artificial intelligence (A.I.), engineering, and robotics through coding and games.

The blaster-toting, wheel-based bot is available now for $500, with its design drawing on much of the technology that DJI has already honed through its quadcopters and other products. Take, for example, its array of sensors — 31 in all — that help it to understand its surroundings, and the first-person view (FPV) camera that streams a real-time video feed to the RoboMaster app.

The camera incorporates machine vision technology that helps the S1 to identify different objects, recognize and respond to sounds, and receive signals from other S1 units in the vicinity. A specialized mechanical gimbal provides precision control for the camera and the prominent gel-bead Blaster, the latter of which will presumably be aimed at Mom or Dad if requests for an allowance raise are repeatedly refused.

The kit also includes four Mecanum wheels, “most commonly found on competitive robots,” according to DJI, with each one incorporating 12 rollers that allow omnidirectional movement and precision control during the robot’s operation.

Once the kit is assembled and fired up, opportunities open up for both play and coding, with a plethora of DJI guides and video courses showing the way with Scratch 3.0 and Python programming languages that help users to get the most out the machine.

DJI describes the RoboMaster S1 as “approachable to newcomers while offering advanced features to users already experienced in A.I., engineering, and robotics.”

Commenting on the launch of its new educational robot, Frank Wang, DJI’s founder and CEO, said: “We developed the RoboMaster S1 with the next generation of innovators in mind, making robotics and programming not just more accessible but also an entertaining and academic experience.”

DJI’s new robot is born out of the company’s involvement in the annual RoboMaster contest for aspiring young engineers held in Shenzhen, China, an event that can lead to job offers from DJI for some of the brightest talents in attendance.

The RoboMaster S1 certainly looks like a promising effort as the company dives into yet another new market, though the $500 price tag may be prohibitive for many interested folks. In that case, check out this Digital Trends piece highlighting some reasonably priced alternatives.