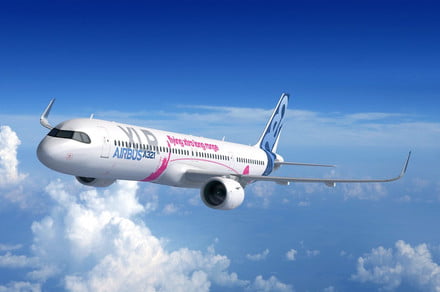 Airbus has unveiled the design of its new A321XLR jet, which it says will be the world’s longest-range single-aisle airliner when it takes to the skies in 2023.

The A321XLR, which will carry between 180 and 220 passengers depending on its configuration, will be capable of making trips of around 5,400 miles (think London to L.A.) — 15% farther than the A321LR that precedes it.

Announcing the jet at this week’s Paris Air Show, Airbus said the added range will enable some carriers to operate a lower-cost single-aisle aircraft on longer and less heavily traveled routes, “many of which can now only be served by larger and less efficient wide-body aircraft.”

These include international routes such as India to Europe or China to Australia, while also extending the non-stop reach for direct trans-Atlantic flights between Europe and the Americas.

The aviation giant promised that the A321XLR’s Airspace cabin will provide “the best travel experience, while offering seats in all classes with the same high-comfort as on long-haul wide-body aircraft.”

The first customer for the 44.5-meter-long A321XLR was announced this week as L.A.-based aircraft leasing firm Air Lease Corporation, which has inked a deal to purchase 27 of the new planes.

Speaking at the Paris Air Show about its order, Air Lease CEO John Plueger described the new aircraft as offering “a huge cost advantage to airlines,” adding that its efficiency means it can play a major role in the environmental sustainability of the aviation industry.

While the A321XLR sports the longest range for a single-aisle airliner, Airbus’s A350-900 ULR wide-body plane is currently flying the longest route in the world covering about 10,000 miles, around double that of the new plane.