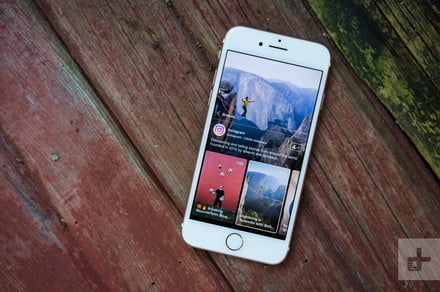 Instagram’s IGTV launched with one main differentiating feature from platforms like YouTube — vertical video. But a year later, IGTV is conforming to traditional video with support for horizontal videos. On Thursday, May 23, Instagram shared an update that brings the more traditional horizontal video aspect ratio to the mobile-focused video platform.

At launch, Instagram said the vertical orientation made sense for the mobile-first platform, allowing for full-screen viewing without turning the smartphone. The original design also appeared to channel the popular Stories format. Horizontal videos could be added to the platform previously, but horizontal videos were surrounded by a lot of empty space. Even turning the smartphone, before the update, didn’t switch to a full-screen horizontal view.

With the update, horizontal videos will fill more of the screen by turning the smartphone on its side. While the change isn’t anything new and simply returns the platform to the more traditional video format without losing so much screen real estate, the change feels similar to when Instagram moved beyond square crops in the main app — and could boost the young IGTV.

“We realize this is an evolution from where IGTV started — we believe it’s the right change for viewers and creators,” Instagram said. “In many ways, opening IGTV to more than just vertical videos is similar to when we opened Instagram to more than just square photos in 2015. It enabled creativity to flourish and engagement to rise — and we believe the same will happen again with IGTV.”

Portrait orientation may waste less space with a single person on the screen, but horizontal leaves more room for more types of content. The change also makes IGTV easier for creators already recording in traditional aspect ratios for YouTube and production companies bringing televised content to Instagram’s video platform, who previously had to figure out how, exactly, to crop the video to vertical.

Instagram suggests the change will bring more videos to the platform from creators who were reluctant to make the vertical switch, along with expanding for genres that don’t work as well in vertical, such as sports. The company says it will continue to evolve IGTV.

Instagram’s video platform turns a year old in June. Since the launch, Instagram has encouraged more views by allowing creators to share previews of the IGTV content inside the Instagram feed. That change boosted the number of views on the platform — perhaps succumbing to horizontal video could bring even more growth for the young video platform.