Three rare exocomets spotted in orbit around a nearby star 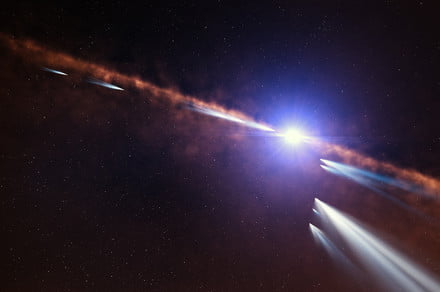 Scientists have spotted three exocomets, or comets outside of our Solar System, in orbit around a bright young star called Beta Pictoris in the constellation of Pictor. They used NASA’s Transiting Exoplanets Survey Satellite (TESS) to capture detailed data about the amount of light being generated, which they used to identify the tails of the comets.

Exocomets are rarely spotted. First observed in 1987 in the same Beta Pictoris system, since then only 11 stars have been found which have exocomets in orbit around them. All of the stars which support exocomets discovered thus far are young A-type stars, which are white or bluish in color and have very high surface temperatures of up to 7500 Kelvin.

Beta Pictoris is a particularly good location to hunt for cosmic bodies because it is relatively nearby, at 63 light-years away from Earth. It also has a debris disk of dust and gas around it which is warped, and which could potentially create icy bodies like those found in the Kuiper Belt in our Solar System. And on a practial level, astronomers are able to get a good view of the disk because of its angle in relation to Earth. Plus there is a lot of dust in the disk which scatters starlight, making it shine brightly.

“Because of its close proximity and circumstellar disk, the Beta Pictoris system can be considered an ideal test bed to study the formation and evolution of planetary systems, including minor bodies such as exocomets and exomoons,” the researchers say in the paper.

The researchers used data collected from TESS between October 19, 2018 and February 1, 2019 to search for exocomets. They observed three events during this 105-day period in which the light from the star dipped for up to two days at a time. These dips suggest that a comet with a long tail was passing between the disk and Earth, which is how they were able to identify the exocomets.

The existence of exocomets in the system was predicted 20 years ago by French astronomer Alain Lecavelier des Etangs, and now the prediction has finally been shown to be correct. The next step for the team is to perform more comprehensive modeling using the TESS data to search for more exocomets and other bodies.

The findings are to be published in the journal Astronomy & Astrophysics and are available to view on pre-publication archive arXiv.org.