These are the 20 best Android games you can play offline 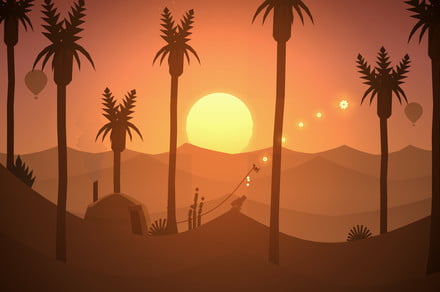 Even in our increasingly connected world you may find yourself without Wi-Fi or data access throughout your day-to-day life. What better way to pass the time than to play a mobile game? Many of the most popular mobile games require an internet connection. Trying to open your favorite game while on a plane only to realize it won’t work can be a drag. To help you avoid that unfortunate dilemma, we compiled a list of the 20 best offline games for Android, each of which doesn’t require Wi-Fi or data access to enjoy.

Monument Valley 2, the sequel to the 2014 sensation, introduced a heartfelt bond between mother and child. Protagonist Ro guides her child through the gorgeous, dream-like puzzle levels. The environments themselves are even more pleasant than the already delightful original. Seeing landscapes change with your inputs is perhaps an even cleverer illusion than the actual puzzles. Relaxing, moving, and utterly mesmerizing, Monument Valley 2 is one of the best puzzle-adventures on Android.

Agent 47’s move from stealth to tactical strategy actually made a whole ton of sense thematically. But we doubt anyone expected Hitman Go to be one of the better turn-based games around on mobile. Each grid-based level plays out like a game of chess. Characters are even rendered as model figures. Dispatching enemies while working through rooms is just as satisfying as it typically is in real time. Mechanically sound and wonderfully designed, Hitman Go is the turn-based puzzle game you never knew you needed. No prior knowledge of the Hitman franchise is required to fully enjoy it, either.

Keeping in step with its predecessor, Alto’s Odyssey is an automatic runner that replaces running shoes for a nifty snowboard. Unlike the original which stuck with conventional snowy alps, Alto’s Odyssey takes place throughout several desert-themed chapters. Chapters contain randomly generated areas to keep the experience fresh. The star here is the simplistic gameplay, which continuously has a level of freedom and joy to it rarely seen in the popular mobile genre.

The iconic and sadly defunct basketball series NBA Jam translates remarkably well to mobile. With a campaign mode, play now, and local multiplayer available offline, NBA Jam boasts a ton of content for a low price. The two-versus-two style of arcade action is easy to grasp with touchscreen controls. You don’t need to be a basketball aficionado to jump into the high-flying escapades of NBA Jam. This is a great choice for sports game fans looking for something that can be played in both quick spurts and long gaming sessions.

A collection of 523 line puzzles scattered across a majestic and mysterious island, The Witness is one of the best puzzle games ever made. Using rulesets cleverly learned through play, The Witness‘ puzzles gradually increase in difficulty. Soon you’ll be using the environment around you to assist in solving puzzles and it won’t take long until you’re obsessively working on solutions both in your head and on scraps of paper.

Johnny Wyles is dying and wants to go to the moon, though he doesn’t know why. He enlists the help of two doctors who help to recreate memories of his life en route to granting his dying wish. From there, To the Moon quickly turns into a moving love story. More narrative experience than a game, To the Moon is well-written and accompanied by wonderful 16-bit visuals. If you want a great yarn, To the Moon holds one of the best game narratives on Android.

A mainstay on the Google Play charts since its 2012 launch, Plague Inc. is one of the most satisfying and diabolical real-time strategy games around. At the start of each simulation, you create a virus that will hopefully wipe out the entire population (yes, it’s twisted). Thoroughly engaging and actually somewhat educational, Plague Inc. makes creating pandemics an experience that you’ll never get sick (sorry) of.

Welltaro decides to explore a well. That’s the premise of Downwell and an obvious one at that. What follows is a frenetic roguelike centered around perpetual downward motion. Guiding Welltaro, you must avoid obstacles and enemies with the help of gunboots that only recharge when touching ground. Downwell’s levels are randomly generated, which makes each run different than the last. Designed to be played in portrait mode with minimalistic monochromatic visuals, Downwell is an excellent, if very challenging, time waster.

Double Fine’s Broken Age tells the story of two teenagers breaking free from the humdrum of their daily lives. Fashioned as a classic point-and-click adventure title, Broken Age has intriguing puzzles, gorgeous hand-drawn animations, and a gripping story. It also helps that Broken Age‘s cast is quite talented with the likes of Jack Black and Elijah Wood lending their voices to the memorable characters.

Perhaps the ultimate town management game on Android and one of the defining games of this generation, Stardew Valley sets up well for mobile. It’s the perfect experience to play for short chunks of time each and every day. But you can also log long stretches in Pelican Town quite easily. Taking care of your crops and making small talk with the folks of Pelican Town is surprisingly rewarding. Stardew Valley‘s charming writing, endearing visuals, and addictive gameplay make it one of the best games on Android.

A dungeon crawler, Wayward Souls excels in delivering satisfying and strategic action fit for mobile devices. Designed specifically with touchscreen controls in mind, Wayward Souls is one of the better roguelikes available on Android. Death is permanent, so each run is a new experience. And even successful runs don’t take very long. Surprisingly deep combat and six unique characters to choose from help make Wayward Souls stand out among a sea of average dungeon crawlers on Android.

Another story-focused adventure, Old Man’s Journey follows the titular character on a quest across the world. A game about longing, regret, love, and the choices we make, Old Man’s Journey features stirring writing and beautiful visuals. The actual gameplay is limited to helping the Old Man move past obstacles, but this limited interaction is enough to make you feel as if you’re really on this journey with him.

Melding dungeon crawling with match-three puzzlers, 10000000 (Ten million) is one of the most inventive games on this list. The goal is to accumulate 10,000,000 points in order to escape the dungeon. Along the way, you tinker with rows and columns to match three icons in a row. Successful matches grant attacks, let you pile up loot, and even level your character. Puzzles change as you progress further through the dungeon. While it takes a few runs to get the hang of it all, 10000000 is a great choice for anyone wanting to shake things up and play something genuinely novel.

A wordless love story, Florence is a stellar visual novel that can be completed in one sitting. It magically re-creates the feeling of falling in and out of love with the help of gorgeous animations and simplistic puzzles. The puzzles themselves, though simple, cleverly help inform the player of the emotions of Florence and her boyfriend. Florence has one of the best love stories in gaming, and it accomplishes this feat without using words. That alone makes it worth a playthrough.

A masterclass in minimalism, Playdead’s Limbo is an utterly unforgettable puzzle-platformer. You play as a young boy, working through ominous environments rendered entirely in shades of black and white. The puzzles range from clever brain teasers to inventive physics puzzles. The star here is the chilling atmosphere, which is an unrelenting and omnipresent force.

Final Fantasy Tactics: The War of the Lions

Final Fantasy Tactics: The War of the Lions, the enhanced PSP remake of the PlayStation classic, is arguably the greatest turn-based strategy game ever made. With a treasure trove of content, a ridiculously nuanced battle system, and a sweeping story filled with memorable characters, Final Fantasy Tactics is an experience that will likely demand dozens, if not hundreds of hours of your time.

While dozens upon dozens of Star Wars games have been made, Star Wars: Knights of the Old Republic is possibly the very best. The 2003 RPG featured a rich story and deep role-playing gameplay, making it an instant classic in the process. KOTOR stands the test of time on Android. If you’re a Star Wars fan or RPG enthusiast, BioWare’s KOTOR is a modern classic that you should play as soon as possible.

Hailing from one of the best modern strategy franchises around, XCOM: Enemy Within brings the refined tactics gameplay to Android with great success. XCOM has some of the deepest turn-based combat you can find on any platform. If you dabble in tactics, XCOM: Enemy Within is sure to delight.

The latest entry in the most popular tower defense franchise on mobile, Bloons TD 6 is an engaging strategy game with colorful visuals. Bloons TD 6 features gameplay that is easy to pick up and learn on the fly, but the upgrade system is vast, allowing for new strategies to form even after dozens of hours of play. More laid back than some other strategy games on this list, Bloons TD 6 will appeal to even just casual fans of the tower defense genre.