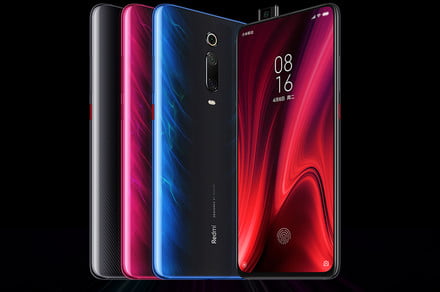 The Redmi K20 Pro squashes the presumption that cheap phones only ever have midrange processors. It does so by including the Snapdragon 855 chip inside a phone that costs less than $400. Remember, the OnePlus 7 Pro has the same processor and costs $750, while the $400 Google Pixel 3a has a Snapdragon 670.

The rest of the K20 Pro’s tech means it eclipses even the Xiaomi-backed Pocophone F1 from last year as the dream low-cost, high-spec smartphone bargain. Never heard of Redmi? It’s now a sub-brand of Xiaomi. After spending several years under its own name as the Chinese manufacturer’s cost-effective range, Redmi was spun off as its own brand in early 2019.

It’s not just the Snapdragon 855 that makes the Redmi K20 Pro such astonishing value for money. The front has a 6.39-inch OLED screen without a notch, as a 20-megapixel pop-up camera takes care of the selfie situation. On the back are three camera lenses, with the main sensor being the Sony IMX586, the same 48-megapixel camera seen on the Xiaomi Mi 9, and the OnePlus 7 Pro. It’s joined by a second 13-megapixel wide-angle lens, and an 8-megapixel telephoto lens for a 2x optical zoom.

A 4,000mAh battery powers the K20 Pro, and is recharged using a 27-watt fast charging system, which is said to take around 70 minutes to reach maximum charge. There’s a choice of RAM and storage memory capacity, plus there is a MicroSD card slot, a 3.5mm headphone socket, an in-display fingerprint sensor, and Xiaomi’s MIUI 10 over the top of Android 9 Pie. The curved rear panel looks beautiful in many of the images, with a crazy flame pattern making the red or blue models really catch the eye.

Announced in China with a release at the beginning of June, the cheapest 6GB/64GB Redmi K20 Pro will cost the equivalent of about $360. The most expensive version with 8GB of RAM and 256GB of storage will cost approximately $435. Redmi has also announced a standard K20, which shares the same screen technology, but swaps the 855 for a Snapdragon 730 chip, and makes some other technical alterations to reduce the price even further.

The Redmi K20 Pro is unlikely to see a release in the U.S., but there’s a strong chance it will arrive in Europe and the U.K., where the Redmi brand is already on sale in Xiaomi’s retail locations and online.