Home News The Motorola One Vision is a 21:9 Android One phone with a...
News

The Motorola One Vision is a 21:9 Android One phone with a 48-megapixel camera 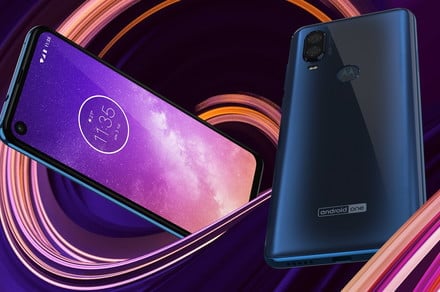 Budget phones often don’t get many software updates, which can restrict a device’s lifespan. Google’s Android One program is trying to change that with certified phones from various manufacturers that are guaranteed two years of Android version updates and three years of security updates, and Motorola is the latest to deliver with the new Motorola One Vision.

This isn’t Motorola’s first Android One phone, though. The company tested waters with the Moto X4 Android One in 2017, and subsequently released the Motorola One and Motorola One Power in 2018. These phones are a stark contrast to Motorola’s Moto G-series budget phones, which are generally set to receive only one Android version update in their lifespan.

Sadly, Motorola isn’t bringing the One Vision to the U.S. or Canada just yet. Here’s everything you need to know.

The Motorola One Vision doesn’t look anything like Motorola’s most recent Moto G7. It mimics last year’s Motorola One instead, with a vertical dual-camera setup placed in the top left corner on the rear. The iconic dimple with the Motorola branding is still present, and it doubles as a fingerprint sensor.

It’s a Gorilla Glass back, which means you’ll need a case to keep it protected, but Motorola has added a gradient design to help the phone stand out. There are two color options to choose from — sapphire or bronze — and they both look attractive in their own ways. The bronze is a little more subdued, and the sapphire gradient stands out.

The front is more impressive. Motorola has opted for a hole-punch camera design, which is when the selfie camera floats on the display like a hole punched in a piece of paper. It’s the same screen design you’ll see on Samsung’s latest Galaxy S10 range as well. It’s a way to slim down the bezels around the screen, while still keeping the front-facing camera. The bezels here are shaved down a lot, helping the Motorola One Vision look a lot more modern.

You may also notice the screen looks tall — that’s because the phone uses a 21:9 aspect ratio. Like the Sony Xperia 10 and 10 Plus, the Motorola One Vision is perfect for watching movies, as films are typically filmed in this 21:9 widescreen format. On top of this, you get a 6.3-inch screen so there’s a good deal of screen space, and the 2520 x 1080 resolution should keep content looking sharp.

The right edge of the phone is where you’ll find the power button and volume rocker, and you’ll be pleased to know there’s a headphone jack, as well as a USB-C port to charge the battery. The body of the phone is also IP52 rated, which means it’s dust resistant, and is protected from dripping water. You’ll need to be safe with this phone around water.

What’s inside powering the phone? It’s Samsung’s Exynos 9609 processor paired with 4GB of RAM. It’s a midrange chip, so you should expect the phone to tackle most day-to-day tasks with relative ease, though it may struggle with high-end gaming.

It comes packed with 128GB of internal storage, and there’s a MicroSD card slot that lets you add up to 512GB if you need more.

How long will the phone last? Likely around a day thanks to a 3,500mAh battery. Motorola said the One Vision also comes with support for its 15W TurboPower charging technology, which should deliver seven hours of power in just 15 minutes of charging.

The Motorola One Vision runs Android 9 Pie, the current version of the Android mobile operating system. Since it’s an Android One phone, that means you’re guaranteed to receive two years of Android version upgrades — so this phone will get Android Q and Android R — as well as three years of security updates.

The other perk of Android One phones is the software experience. The phone runs stock Android, so it’s uncluttered and bloatware-free. Only certain Google apps are preinstalled.

That being said, Motorola has added a few of its classic Motorola Actions. These are gestures, and the three available are the twist twice to launch the camera gesture, chop twice for the flashlight, and the three finger swipe for screenshots.

The spotlight feature on the Motorola One Vision is its camera, because one of the cameras on the rear packs a whopping 48 megapixels (f/1.7 with optical image stabilization). But you can’t make use of its maximum quality, as all images will output just a 12-megapixel resolution. Why is this? Because the One Vision utilizes Quad Pixel technology; it combines four pixels into one for four times more light sensitivity, and the more light the camera can take in means better low light photography.

On top of this, there’s a new Night Vision mode in the camera app. Similar to modes like Night Sight on the Google Pixel 3 or Night Mode on the Huawei P30 Pro, Night Vision stacks eight frames together, clears the noise, and combines exposures for one strong photo. It only works on the rear camera, but it will help deliver capable photos when the sun has gone down.

There’s also an extra 5-megapixel, depth-sensing camera on the rear, and it’s used to get improved Portrait Mode photos. Motorola is also taking a page out of Apple’s playbook with portrait lighting features. Now you can choose from effects like stage, noir, color pop, and sunshine to add some flair to Portrait Mode photos.

The front-facing selfie camera is a 25-megapixel camera (f/2.0), and it also supports the Quad Pixel technology. However, it doesn’t use it all the time. Instead, there’s a separate mode you can toggle on to get more light, and you’ll receive photos in a 6-megapixel resolution. This is ideal for when taking selfies in dark spaces.

Motorola is also adding a few artificially intelligent smarts into the camera too, but it’s largely playing catch-up to the rest of the industry. There’s now a Shot Optimization mode, which detects up to 10 scenes — from sunsets to food — and will adjust a photo’s ISO, exposure, and more for the best result. The A.I. will also recognize whether you are photographing a person or are in a dark environment, and will automatically recommend you use Portrait Mode or Night Vision, respectively. Smart Composition is a new addition as well, and it crops images after you’ve captured them to the rule of thirds, and you can choose whether you want to save it to your gallery.

This is on top of all the other standard camera features you’ll find on Motorola phones now, like Auto Smile Capture, Spot Color, Cinemagraphs, and more.

The Motorola One Vision isn’t coming to the U.S. or Canada at the moment. Instead, it’s available now in Brazil, with Mexico and select countries in Latin America to follow.

In Europe, it will be available mid-May with a “promotional launch price” of 299 euros (around $335). On May 16, the phone will launch in Saudi Arabia and Thailand. Eventually, select countries in Asia, the Middle East, and Australia will get the phone. Prices will vary by country.

What’s the best smart thermostat for your Amazon Echo?

Which small smart speaker is better, the Echo Dot or the Nest Mini?