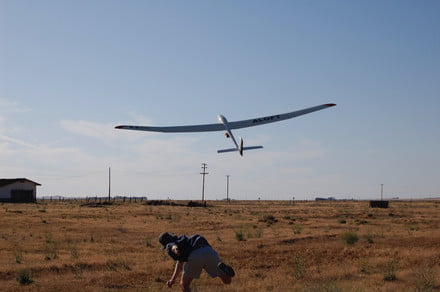 Birds can fly by flapping their wings to achieve lift. But once they have achieved a certain elevation, they can sometimes do the aerial equivalent of freewheeling by gliding on rising air currents, known as thermals. This energy-saving technique could also be used by drones to allow them to remain airborne for longer.

The U.S. Navy has been working toward this goal for some time with its Autonomous Locator of Thermals (ALOFT) project. We covered the initiative several years ago when it was in its early stages of research. However, this month things took a step forward when a new patent application was published, describing improved software that will hopefully allow this project (and its drones) to truly soar.

“This is all about finding and using energy in the environment,” Brian Metzger, a senior technology manager at TechLink, who is involved with the project, told Digital Trends. “Mother Nature taught birds how to find thermals, and now the Naval Research Lab is teaching drones to do it too — so they can fly longer missions but without adding batteries.”

The new software, developed by Naval Research Laboratory engineer Aaron Kahn, uses something called Kalman filtering. This algorithm is already employed by the Navy for navigating submarines and cruise missiles. Thanks to this research, it can also now be used for drones, ranging from small gliders to long-endurance solar-soaring UAVs, to increase their range and endurance by seeking out and finding thermals.

“The technique is applicable to both manned and unmanned aircraft,” the patent application reads. “Because the method is parameterized, it can be quickly tailored to a variety of aircraft types.”

For regular consumers, the really exciting part is that this technology could soon be available for commercial companies. This won’t simply be a fascinating piece of research available only to the U.S. Navy. Instead, TechLink’s goal is to help businesses find out how they can take advantage of this new technology.

“We’re always looking for industry partners who can commercialize government inventions,” Metzger said. “Now that the patent application is published, we’ll guide UAV companies through evaluation and then the patent licensing process so that they can integrate the tech into new and improved drones or aircraft.”


Facebook
Twitter
Pinterest
WhatsApp
Previous articleThe Walking Dead: Onslaught allows you to slice VR zombies in creative ways
Next articleOnePlus 7 Pro vs OnePlus 7: Is the Pro worth the extra dough?