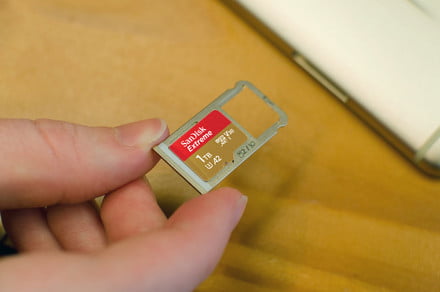 If you want to add more storage to your laptop and don’t want to mess with upgrading your device’s solid-state drive, you can now buy SanDisk’s 1TB microSDXC card and insert it into your computer’s memory card slot. This solution works perfectly for devices like Microsoft’s Surface Go, which top out with just a 128GB internal drive that’s non-user replaceable, the premium Surface Pro 6, or even smartphones like Samsung’s Galaxy S10 series. All these devices support microSD card slots. And unlike USB storage drives, you will be able to just insert the card into your device without any bulky adapters or converters for a seamless look.

SanDisk initially announced the 1TB capacity of its microSD memory card at Mobile World Congress this year, and now it’s ready for purchase for $450. The Sandisk Extreme microSDXC card is a UHS-1 rated card with read speeds up to 160MB per second and write speeds up to 90MB per second, according to the company. And if you’re looking to use this on mobile phones for capturing 4K videos, Sandisk claims a sustained video capture rate of 30MB per second on UHS-enabled host devices.

With this much capacity, you’ll be able to store more of your documents, photos, music, and videos locally without having to resort to the cloud. Since you can configure Microsoft’s Surface Pro 6 with up to 1TB of storage, adding SanDisk’s 1TB card means you can either double your storage or use the memory card to back up your files. Like solid-state storage drives, the cards are more also more durable than hard drives, so your data will remain safe even in more extreme environments. SanDisk claims that these cards are shockproof, temperature-proof, waterproof, and X-ray proof, so they’re a great option for mobile photography and video projects.

Though the 1TB card is pricey, it is the only option on the market with that much capacity. Rivals Samsung and Micron also announced they will be launching 1TB versions in the future, but neither card is available yet, leaving SanDisk as the only option for digital hoarders. If you’re looking to save on cost and don’t need to utilize 1TB of storage, SanDisk also offers a 512GB variant of the SanDisk Extreme microSDXC card, and there are also cheaper cards in the 400GB to 500GB range from other manufacturers.