Home News Remember the summer of ’69? NASA wants to hear your memories of...
News

Remember the summer of ’69? NASA wants to hear your memories of the moon landing 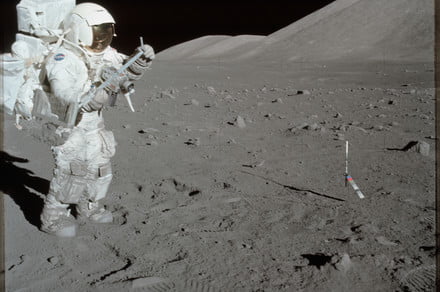 Do you remember the Apollo mission? Or do you have family members or friends with memories of the Apollo era? Then you can contribute your stories to a new NASA project.

This year marks the 50th anniversary of the historic moon landing which happened on July 20, 1969, and was one of the most important days in living memory of space exploration. To celebrate this anniversary, NASA is launching an audio project called Apollo Stories which invites the public to submit their memories about where they were when the moon landing happened, what impact the moon landing had on them, and what else they remember about that time.

The oral history project will collect home-made audio recordings of reminiscences about the era and thoughts on lunar exploration. NASA is encouraging people to record their own thoughts, or to interview relatives who remember the time.

The instructions on the Apollo Stories website are simple:

“Browse our list of suggested questions and see what inspires you, or think of your own.
Record audio of yourself or interview a loved one who remembers the Apollo era (1960-1972).
Email your story to NASA!”

There are suggested topics for people to discuss, like what life was like for them in 1969, or what they would like to know about the moon. The website suggests keeping the answers brief, at under two minutes each, and recording audio using a smartphone. Once you have made a recording, you can send it to NASA at [email protected].

The stories will be integrated into an audio series called NASA Explorers: Apollo, which will also include interviews with experts about the Apollo program, explanations about the scientific influence of the mission, and discussion of the broader cultural impact of the moon over the last 50 years. “Listeners will meet a Moon detective, tour a lab for space rocks and hear from scientists whose lives and work have been shaped by the Apollo program,” according to NASA.

When the day of the landing came, an estimated 530 million people around the world watched live as Apollo 11 Commander Neil Armstrong took his famous “one small step for man” onto the lunar surface, marking an incredible achievement in the history of space exploration. The other two members of the crew, Command Module Pilot Michael Collins and Lunar Module Pilot Edwin “Buzz” Aldrin, are also remembered for their vital contributions to the success of the mission.