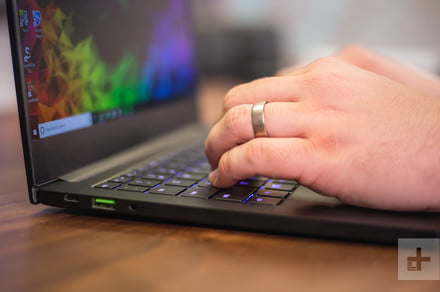 Apple and Razer both make great laptops, but they typically target difference audiences. Where there is some crossover in that Venn diagram though is with the Razer Blade Stealth and the MacBook Pro. These two high-end, powerful, and attractive laptops deserve consideration from anyone who wants a well made, portable laptop with all the performance they need for almost any task.

But when it comes down to the wire, which should you pick? To find out, we pitted the Razer Blade Stealth against the MacBook Pro in a classic head to head to see which comes out on top.

We’re huge fans of the Razer Blade and the latest incarnation of the Blade Stealth is like a more studious little brother. It’s not quite as gamer-focused as the standard Blade, it’s a little smaller, a little more professional looking, but it still enjoys many of the same great physical features and design choices. It’s got the same, new matte black color scheme of the standard Blade and also benefits from the boxier shape. The understated logo without the Razer green helps the whole laptop distance itself from its gamer roots into something that would suit gamers and non-gamers alike.

The new Blade Stealth has thinner bezels than ever before and the unibody-aluminum shell means it’s sturdy and doesn’t flex or bend when the lid is opened or closed.

The MacBook Pro is similarly sturdy and well built, with aggressively trimmed bezels that keep the laptop looking modern, even if its silver paint job isn’t quite the trend-setting aesthetic that it once was. Other MacBooks have a greater range of color options, but for the Pro you’re restricted to the Space Gray that makes up the core of Apple’s hardware lineup.

Looks aside, both laptops have their own eccentricities when it comes to inputs. The MacBook Pro has the unique Touch Bar option which, while not entirely useful, still looks fantastic and can have some intriguing contextual options for interested users. The touchpad on the laptop is fantastic too, with a large and responsive space to tap and swipe away in. The keyboard is a real weak point of the MacBook Pro though and it’s one we hope Apple continues to work on as it still struggles with failures and sticky keys.

The Blade Stealth on the other hand, has a great keyboard that’s fun to type on and to game with. The key layout takes a little getting used to, especially if you’d miss the right-shift key, but it looks good with zone-based RGB backlighting. The touchpad is also excellent and is a worthy competitor for Apple’s alternative in that respect.

The MacBook Pro’s ports are, like many other contemporary Apple products, limited to Thunderbolt 3 USB-C connectors. You get four of them, so there’s a lot of potential for multiple connected devices, but they’ll need to be USB-C compatible or have an adaptor to make them so. The Blade Stealth has a wider array of options, though not more. It comes with a single Thunderbolt 3 connector, a USB-C 3.1 port, and a pair of USB-A 3.1 ports for compatibility with older devices.

No matter which Razer Blade Stealth configuration you opt for, you get a quad-core Intel Core i7-8565 CPU. That’s a real blessing for those who want to work on their Razer laptop, as that chip crunched through every task we threw at it with ease, even beating laptops with similarly configured hardware.

Elsewhere in the base configuration it comes with 8GB of memory and 256GB of SSD storage for $1,300. An additional $200 upgrades the configuration to 16GB of RAM and replaces the Intel onboard UHD 620 graphics chip with a more capable Nvidia MX150 — the 4GB version with a 25w TDP. While we didn’t find that graphics core’s performance exactly stellar in our review, it’s typically more capable than other laptops with the MX150 and can deliver 60 FPS in games like Rocket League and more than 30 FPS in Civilization VI and Fortnite if you’re willing to lower the settings a little.

Both of these configurations come with 1080p 13.3-inch screens which we found to be exceedingly bright, maxing out at more than 400 nits. That’s impressive alone, although the display’s color support and contrast let it down, falling well behind standouts like the MacBook Pro’s. There is an option for a 4K touchscreen with the Blade Stealth, but for $1,800 it’s hard to justify when it wouldn’t be particularly noticeable at this screen size and would only negatively impact battery life.

The latest-generation of MacBook Pro starts at $1,800 and sports a recently-updated 8th-gen Core i5 processor paired with 8GB of RAM, and 256GB of SSD storage. That’s a decidedly weaker hardware line-up when it comes to price comparisons. Its only real win coming from the Intel Iris Plus Graphics 655 which will be more capable than the UHD 620 in the base Blade Stealth. For a few hundred dollars each you can upgrade the MacBook Pro to a faster quad-core Core i7 CPU and 16GB of memory, but you’ll need to jump up to the more expensive 15-inch model if you want more cores.

The Apple laptop does have the better display though, there’s no denying that. It sports a higher resolution at 2,560 x 1,600 and is extremely bright, making it easily usable outdoors on a sunny day. It also has fantastic contrast and its colors are some of the most accurate and error free of any laptop available today.

Note: There is a MacBook Pro that starts at $1,300, but it doesn’t have the Touch Bar and uses outdated hardware.

The MacBook Pro is a trim and somewhat lean laptop, measuring 11.97 x 8.36 x 0.36-inches and weighing just shy of three pounds. That’s far from the ultra-sleek models we see from some companies, but it’s certainly portable enough that you won’t begrudge hauling it around with you all day. It’s also leaner than the Blade Stealth, which measures 11.99 x 8.27 x 0.58-inches, although it is slightly lighter at between 2.82 and 3.04 pounds, depending on your hardware choices.

As for battery, neither laptop impressed us mightily. Apple promises 10 hours with the MacBook Pro’s 58-watt hour battery and it managed that in our video loop test, though we’d caution heavy usage throughout a workday if you want to make it through its entirety without breaking out the charger.

The Blade Stealth is rated for between 11 and 13 hours, depending on your hardware configuration. Our mid-range model with the MX150 graphics chip could handle seven and a half hours watching 1080P videos on loop, while heavy browser usage saw it drain in as little as five hours.

Razer promises additional battery life from the model without the discrete GPU, which might be worth considering unless you’re dedicated to gaming with the Stealth. Especially since you could save a couple of hundred dollars by doing so.

The Stealth’s pricing helps it sneak the win

As is so often the case with comparisons between Apple and Windows laptops, the pricing is where the MacBook Pro falls down. Its hardware is decent, its screen is beautiful, and its battery is undeniably more robust than the Blade Stealth’s (although we still prefer the MacBook Air’s). But with a starting price that matches the most expensive configuration of Blade Stealth, it’s hard to recommend. We’d typically point to the cheaper non-Touch Bar model, but that is multiple generations back in terms performance at this point.

The 2019 Razer Blade Stealth is a good laptop, but it’s not perfect. It’s one of the best looking 13-inch laptops we’ve ever seen, and the build quality is fantastic. The hardware too is excellent, but we’re not sold on the discrete GPU. It does make the Stealth a more capable gaming laptop, but if that’s important to you the standard Razer Blade (our favorite gaming laptop) is simply a better buy.

In this head to head though, the Blade Stealth is still the better machine. It’s more affordable, has more capable hardware, and it can go toe to toe with the MacBook’s main selling point: Design. There are better laptops out there than both of these, but if it comes down to a choice between the two, the Blade Stealth is the one to pick.