OnePlus 7 Pro vs. Galaxy S10e vs. iPhone XR: A selection of flagship killers 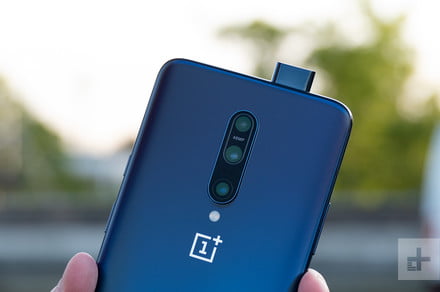 If you’re looking for a smartphone with flagship power but without a flagship price, then you’d traditionally look for a OnePlus phone. But times have changed, and the biggest boys on the block want a slice of that pie. Apple’s iPhone XR and Samsung’s Galaxy S10e offer the same power as their flagship brethren, but at a lower price. With the recent release of the stunning OnePlus 7 Pro, this quandary is even harder to answer than ever before. Which of the three is best for you? We found out.

It’s hard to judge performance on a phone with a flagship processor these days because they’re all extremely fast. The OnePlus 7 Pro and Galaxy S10e both pack the Qualcomm Snapdragon 855, while the iPhone XR comes with Apple’s A12 Bionic processor. The OnePlus phone wins out in pure benchmark results, but in real-life performance each phone is smooth and will have no problem running the latest 3D games.

So what of charging? Again, you’ll find fast charging on all three. The OnePlus 7 Pro’s charging is the fastest, charging from 15 percent to 53 percent in 20 minutes. The S10e’s charging is hampered by aging tech, and while the iPhone has fast charging, you’ll need to buy an extra charger to use it — which is a bit rubbish. However, those results are balanced by the Qi wireless charging on the iPhone and the Samsung phone. What about battery life then? The OnePlus 7 Pro and S10e get a single day of use on a full charge, while the iPhone XR excels with a strong day-and-a-half battery life, despite having the physically smallest capacity.

It’s hard to judge, but the iPhone’s smooth performance and strong battery life just squeeze it for us.

Beauty is in the eye of the beholder, but it’s clear to most that the OnePlus 7 Pro is absolutely stunning. It’s almost completely bezel-less, sidestepping the iPhone’s notch and the S10e’s hole-punch. But the other two phones aren’t ugly, and we have a soft spot for the iPhone’s strong colors and minimalist design. The S10e is probably the weakest of the three in looks, but it’s still not an ugly duckling by any means.

Glass builds on all three mean durability has its limits — so a case is advised regardless — but you’ll find water-resistance on each. The S10e wins out with a strong IP68-rating, while the iPhone’s IP67-rating is also good enough to guard against accidental dips. The OnePlus phone does have water-resistance, but it’s not IP-rated, which means we’re less inclined to trust it.

It’s another hard one to judge, but we really want to reward the OnePlus 7 Pro’s beautiful design. However, the lack of an IP-rating means the iPhone secures a tie.

You’ll find a 6.1-inch Liquid Retina display on the iPhone XR. That’s Apple-talk for “LCD”, by the way, which immediately puts it at a disadvantage against the two AMOLED displays. Still, it’s a great display, and shows strong colors and deep blacks. But the real competition is between the AMOLED displays. Samsung’s screen tech is absolutely among the best, and it shows. The S10e uses Samsung’s new Dynamic AMOLED technology in its 5.8-inch display and it’s beautiful. It’s so good it earned DisplayMate’s highest A+ rating.

But, so did the OnePlus 7 Pro’s screen. The massive 6.67-inch display shows vivid colors and inky blacks, just like the S10e, but it also comes with a higher resolution and a super-smooth 90Hz refresh rate. OnePlus has this.

There’s a radically different setup on each of these phones. The OnePlus 7 Pro goes ham on lenses, with a 48-megapixel main lens, a 16-megapixel ultra-wide-angle lens, and an 8-megapixel telephoto lens with a 3x optical zoom. It’s strong and versatile, but it’s inconsistent in low light and in portrait mode, and the software needs improving.

The S10e forgoes a triple-lens camera for a tried-and-tested double-lens setup. There’s a 12-megapixel main lens with variable aperture teamed with a 16-megapixel ultra-wide-angle lens. Like the OnePlus, the S10e comes out with a very versatile set of strengths, but unfortunately seems to also suffer in low lighting.

The iPhone only has a single 12-megapixel lens, but it’s imbued with Apple’s usual magic. While it’s not up to the level of the single lens on the Pixel 3, the XR produces excellent imagery — and clinchingly, it does well in low light environments, and creates extremely good portrait mode shots. It’s the winner here.

You’ll find Android 9.0 Pie on the OnePlus and Samsung phones, but with custom manufacturer skins on both. The iPhone, unsurprisingly, comes with Apple’s own iOS 12. Discussions of iOS vs. Android can be complex, but it usually comes down to whichever you have the most experience with. The software on all of these phones is smooth and user-friendly.

But there’s a big difference in update speed. Samsung is easily the slowest to push updates out, and while the S10e is sure to get Android Q and Android R, you’re likely to be waiting upwards of six months after launch to get them. The OnePlus 7 Pro will get the same updates, but is likely to get them much faster. However, it won’t be getting them on the same day they’re released, which can absolutely be said for the iPhone XR. Based on Apple’s previous performance, the iPhone is also likely to be supported for longer.

There’s no shortage of special features here. The S10e comes with AR Emojis, facial unlocking, Bixby (and the Google Assistant), desktop Dex mode, Wireless PowerShare, and Wi-Fi 6. The iPhone XR packs similar features, with Memojis and Face ID definitely beating Samsung’s versions, an excellent gesture navigation system, and all the iOS regulars you’d expect. Samsung does have more though, which brings it back up level.

The OnePlus’s special features are mostly hardware-based, and include the pop-up mechanical selfie camera, the in-display fingerprint scanner, and the 90Hz refresh rate. There are some software additions, but though we like Zen Mode, we can’t see it being as useful as the features on the iPhone and the S10e — so the round is split between those two.

The OnePlus 7 Pro is available now, and starts from $669. The Samsung Galaxy S10e is currently available from a range of carriers and suppliers, with prices starting from $750. The iPhone XR is also available pretty much everywhere, and also starts from $750.

It was a tough fight, but we’re confident that the iPhone XR has been shown to be the strongest of these three. It has not been an easy road — both the Galaxy S10e and the OnePlus 7 Pro are excellent phones with a lot to recommend them, and if you’re in love with the OnePlus 7 Pro’s incredible design or you just can’t get enough of Samsung’s phones, we don’t blame you for choosing one of them. But if it’s an even playing ground, we recommend you buy the iPhone XR. It’s the stronger overall phone.