Home News OnePlus 7 Pro has a selfie camera that pops up so fast...
News 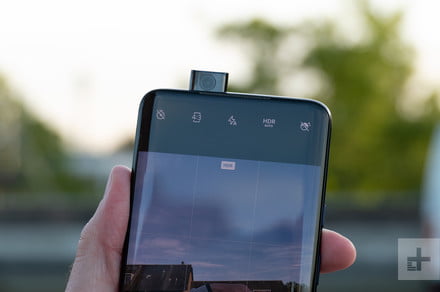 Smartphones have been shaving away the edges surrounding the screen, known as bezels, for several years. But the front selfie camera can’t go away — we need our precious selfies after all — so what do you do? How do you achieve a full screen design without getting rid of the selfie camera?

Some companies like Apple opt for a notch, which cuts into the screen at the top on phones like the iPhone XS. Others like Samsung go for a hole-punch camera like on the Galaxy S10 series, where the camera just floats on the display like a hole punch in a piece of paper. OnePlus has gone a different route: A pop-up camera. It works exactly as it sounds. The camera sits as a separate component inside the body of the new OnePlus 7 Pro, and it pops out mechanically when you need it.

This is the first time we’re seeing a pop-up camera in a phone sold in the U.S., though it’s not a new feature thanks to companies like Vivo. While there may be some concerns about having a mechanical camera pop out of your phone, OnePlus said we don’t have to worry. Here’s how it all works.

Five years of use

How does OnePlus ensure the selfie cam doesn’t break? Well, the company said it put the pop-up mechanism through a hefty 300,000 cycle tests, which means it should last up to five years before potentially showing signs of wear on the OnePlus 7 Pro. That’s even if you use the camera 150 times per day.

OnePlus also released a video showing the pop-up camera lifting an almost 50 pound cement brick. It’s worrying to watch, as it looks like it could snap off at any moment, but the camera module holds its own. It’s a testament to how secure the module is inside the OnePlus 7 Pro’s body. The phone also has a built-in anti-dust mechanism, helping make it even more durable.

What if you drop the phone? OnePlus addressed this potential disaster with the help of the built-in sensors in the phone. The sensors detect when the camera is falling, and they quickly force the camera to retract into the body. It retracts so quickly you’ll hardly notice.

Aside from popping up, does the camera do anything else? It has 16 megapixels packed in, which is higher than usual for most selfie cameras, but it has an aperture of f/2.0. That means it should deliver detailed selfies, though quality may look a little muddy in low light. It also offers electronic image stabilization and can capture video at up to 1,080p at 30 frames per second.

Last but not least, the mechanical camera can be used for Face Unlock — and it’s not slow to work either. The camera is able to rise from the phone’s body in a minuscule 0.53 seconds — meaning that you won’t have to wait long at all to unlock your phone. Unfortunately, this still isn’t a secure unlocking option, so you can only use it to unlock the lock screen, and not for accessing a secure service, like your banking app.

The OnePlus 7 Pro may be the first phone with a mechanical pop-up camera in the U.S., but expect more phones to come with the feature in the near future. Check out our OnePlus 7 Pro review for our in-depth impressions of the phone.


Facebook
Twitter
Pinterest
WhatsApp
Previous articleDownload the latest security patch immediately if your PC is powered by Intel
Next articleGet ready to waste your day with this creepily accurate text-generating A.I.