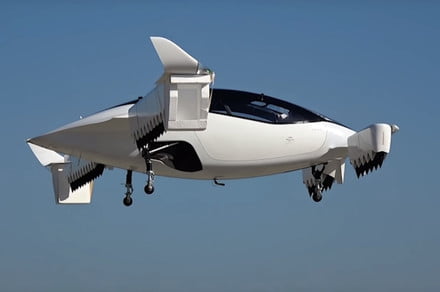 The Lilium Jet, an all-electric, five-seater aircraft, had a successful maiden flight, allowing German startup Lilium to take another step towards its goal of launching an on-demand air taxi service.

Two years ago, Lilium completed test flights on the world’s first electric vertical takeoff and landing (VTOL) jet. The two-seater prototype, which was controlled remotely by a pilot on the ground, performed a successful vertical takeoff and transition between hover mode and forward flight mode. The startup, which later that year received $90 million from venture capitalists, promised then that it would next work on a five-seater electric aircraft for taxi and ridesharing services.

Lilium kept its promise, with the Lilium Jet taking flight on May 4.

The Lilium Jet looks to travel up to 300 kilometers (about 186 miles) in just 60 minutes, and is powered by 36 electric engines that does not create the deafening noise associated with helicopters and commercial aircraft. Low vibrations will provide passengers with a smooth ride, with no operational emissions and record-breaking power-to-weight and thrust-to-noise ratios, Lilium’s electric jet engines are the first to receive commercial certification. The aircraft has no tail, rudder, propellers, or gearbox, as the engines are fitted under the wings, which tilt up for vertical takeoff then shift forward for horizontal flight.

The first test for the Lilium Jet, like the two-seater prototype, was an unmanned flight that was remotely controlled. The video shows the electric aircraft taking off vertically, hovering for a while, and then landing. It does not look like much, especially compared to what the two-seater prototype did two years ago, but it is a big step for the startup as it hopes to roll out a fully operational air taxi service in several cities by 2025.

“We are super excited,” Lilium’s chief commercial officer Remo Gerber told The Verge in an interview. “The first flight went exactly how it was intended to be.”

The Lilium Jet will undergo a more rigorous flight test campaign in its bid to receive certification against commercial aircraft safety standards, according to Lilium co-founder and CEO Daniel Wiegand. Unlike some competitors, Lilium wants to keep a human pilot on board the aircraft to make it easier to obtain approval.

The next big milestone for the aircraft is to achieve successful transition from vertical takeoff to horizontal flight, and while the target for the air taxi service is 2025, Lilium will roll out trials earlier in several as yet unnamed locations.


Facebook
Twitter
Pinterest
WhatsApp
Previous articleHow Super Mario, Magic: The Gathering, and PowerPoint are low-key supercomputers
Next articleMotorola One Vision vs. Nokia 7.1: Which is the best budget phone for you?