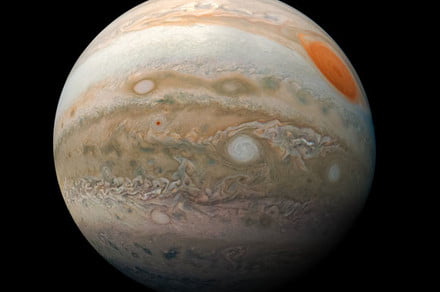 The Juno mission to Jupiter isn’t only capturing beautiful images — it’s also uncovering new information about how the planet’s unusual magnetic field interacts with its atmosphere.

Jupiter has the most powerful magnetic field in our Solar System, 18,000 times as strong as Earth’s. It is extremely large as well, extending seven million kilometers (4.3 million miles) out from the planet towards the Sun. Now scientists have discovered that the field changes over time, in an effect called secular variation.

“Secular variation has been on the wish list of planetary scientists for decades,” Scott Bolton, Juno principal investigator from the Southwest Research Institute in San Antonio, said in a statement. “This discovery could only take place due to Juno’s extremely accurate science instruments and the unique nature of Juno’s orbit, which carries it low over the planet as it travels from pole to pole.”

Researchers compared data gathered by Juno to data from previous Jupiter missions and found small differences in the magnetic field. “Finding something as minute as these changes in something so immense as Jupiter’s magnetic field was a challenge,” Juno scientist Dr. Kimee Moore from Harvard University explained. “Having a baseline of close-up observations over four decades long provided us with just enough data to confirm that Jupiter’s magnetic field does indeed change over time.”

The team believes that the secular variation may be occurring due to interactions between the magnetic field and the planet’s atmosphere. Jupiter has strong atmospheric winds which extend from the surface down to 3000 kilometers (1860 miles) deep, at which point the planet’s matter changes from gas to liquid metal. These winds are thought to stretch and carry the magnetic fields, changing them over time.

A particularly prominent area of variation was the Great Blue Spot, an area near the equator with strong local magnetic fields. There are also strong winds at this location, creating large variations.

“It is incredible that one narrow magnetic hot spot, the Great Blue Spot, could be responsible for almost all of Jupiter’s secular variation, but the numbers bear it out,” Dr. Moore said. “With this new understanding of magnetic fields, during future science passes we will begin to create a planet-wide map of Jupiter’s secular variation. It may also have applications for scientists studying Earth’s magnetic field, which still contains many mysteries to be solved.”

The findings are published in the journal Nature Astronomy.