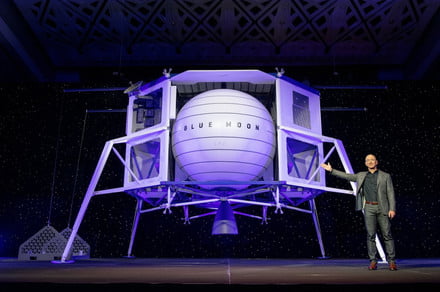 Earth’s nearest neighbor has been getting a whole lot of attention lately, and now Blue Origin owner Jeff Bezos has joined the club with the grand unveiling on Thursday afternoon of the Blue Moon lunar lander.

At a Washington Convention Center event less than a mile from a White House whose occupants also recently expressed a strong desire to return to the moon, Bezos pulled the wraps off a mock-up of Blue Moon, a spacecraft that he said will be able to land on the lunar surface by 2024.

Bezos said that a larger version of the lander will be able to carry astronauts to the moon, deliver payloads to the surface, and deploy as many as four rovers. It will also act as a launch platform for moon-orbiting satellites.

Speaking to an audience comprising NASA personnel and potential Blue Moon customers, Bezos said: “It’s time to go back to the moon — this time to stay.”

During his presentation, Bezos showed off a model of one of the proposed rovers and also unveiled a new BE-7 engine designed to propel the lander. In comments reported by CNN, Bezos said Blue Origin had been working on the development of Blue Moon for the last three years, adding that it hopes to test fire the engine for the first time this summer.

Today, our founder shared our vision to go to space to benefit Earth. We must return to the Moon — this time to stay. We’re ready to support @NASA in getting there by 2024 with #bluemoon. pic.twitter.com/UqQyMa9Zcn

Bezos said the company’s work on its New Shepard rocket technology, as well as on its far more powerful New Glenn booster, has helped it to learn much about how to take on its most ambitious project to date.

No human has stepped onto the surface of the moon since NASA’s final Apollo mission in 1972, but following Vice President Mike Pence’s speech in March 2019 in which he stated the administration’s desire to return, NASA has started work on a mission that could take place within five years. The space agency will be considering commercial gear for the mission, with Blue Origin hoping to be at the front of the line.

The big question now is whether Blue Origin can deliver on time. Target dates for so many space-based projects — especially the more ambitious ones — end up slipping, a fact not lost on Bezos, who insists his team will be able to meet the deadline.

This isn’t the first time the Blue Origin owner has put the moon front and center. Two years ago, he was talking about creating a human settlement there, as part of an even more grandiose vision. “I think that if you go to the moon first, and make the moon your home, then you can get to Mars more easily,” Bezos said at the time. On Thursday, his bold plan took one giant leap forward. Now all eyes are on whether he can deliver.

Chromebooks are such handy computing devices. They're generally affordable, are available with excellent keyboards and screens, and last for years
Read more

Most Windows 10 computers come with Windows Defender installed and running in the background. It keeps the vast majority of
Read more

Chromebooks are such handy computing devices. They're generally affordable, are available with excellent keyboards and screens, and last for years
Read more