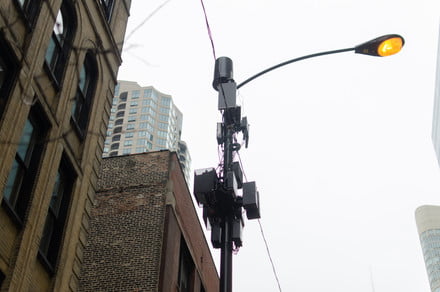 5G will completely change the way we use our mobile phones, offering super high speeds that won’t just mean downloading your favorite shows faster. But 5G comes with a host of concerns, from limited range and poor building penetration to worries of adverse health effects.

But now there’s a new issue: weather satellites. An April article in Nature set the meteorological community into an uproar, as it detailed the potential fallout of a recent auction from the Federal Communications Commission of  24.25 to 24.45 and 24.75 to 25.25 gigahertz (GHz) spectrum. There’s one problem: that’s close to the frequency meteorologists use to detect water vapor in the air.

At a frequency of 23.8 GHz, water vapor emits a weak radio signal, which satellites detect. Water vapor imagery has become a crucial part of forecasting the weather, as it helps meteorologists better understand movement in the atmosphere, and provides computer models with crucial data to better forecast the development of storms.

“The fears are realistic as a reduction in the ability to detect water vapor is estimated to return our forecast accuracy to levels last seen around 1980,” Kevin McMahon, executive director of mobile and emerging technologies at System and Programming Resources, Inc. (SPR), told Digital Trends. “We’re bumping up against nature. There are consequential trade offs to consider.”

The apparent assault on remote sensing of weather isn’t over, either. Future planned auctions may affect the detection of precipitation (36 to 37 GHz), temperature (50.2 to 50.4 GHz), and even the traditional cloud sensing of weather satellites (80 to 90 GHz).

But is all of this fear and loathing just a high-tech version of Chicken Little? Probably, and here’s why.

It’s all about propagation

To understand why, we first need to know the science behind how radio frequency works, most importantly in how it propagates. Perhaps the best way to understand this is to use the radios in our homes and cars as an example.

At very low frequencies, radio waves travel farther because they have longer ‘wavelengths.’ They also can travel through objects easily. Think of a shortwave radio — broadcasts can travel around the world at night using relatively little power (it’s also in a propagatory ‘sweet spot’ too). Similarly, AM radio broadcasts, whose frequencies sit just below that of shortwave, can also travel long distances at night, but not as far as shortwave.

Now compare this to an FM signal, whose frequency us much higher. With a much shorter wavelength, FM radio signals rarely travel more than 100 miles or so at best. To transmit over a substantial distance, your power needs are much higher than the shortwave or AM bands.

Traditional mobile phones operate on frequencies well above FM radio. As you’d guess, the wavelengths are much shorter so the range is reduced even further, and its ability to deal with obstructions is far less robust. This is why early next-generation wireless networks in the U.S. were so poor: operating at frequencies of 1700 and 2100MHz, the range of towers was significantly less, and indoor reception was spotty.

It has gotten immensely better, but only thanks to an expansive (and rather closely spaced) network of cellular towers. But that’s not possible everywhere, and wireless companies — T-Mobile most notably — have hoarded lower frequency spectrum as it becomes available. But even there, it’s not clear quite yet how to get the super high speeds that 5G is expected to provide — since bandwidth is still tight.

So why use gigahertz spectrum in 5G, then?

A simple reason: congestion. Frequency spectrum on the lower bands are shared by dozens if not hundreds of uses. As a result, small portions of spectrum serve a whole lot of devices. As you get into the multi-GHz portion of the radio spectrum, there are far less people using it. So little, that the small hoses of bandwidth of lower band wireless become large pipes at these super high frequencies, or millimeter wave (mmWave).

mmWave covers frequencies roughly 30 to 300GHz, although frequencies as low as 24GHz are considered mmWave too. The amount of bandwidth available in mmWave is immense: experts believe mmWave has the potential to boost download speeds up to as much as 10Gbps — making all kinds of applications possible including live virtual and augmented reality, smart autonomous vehicles, and more. Any of these applications require massive amounts of bandwidth, and the spectrum just isn’t there across the lower bands to do it.

But let’s return to the discussion on propagation. Already at frequencies of 1700 and 2100MHz where most current networks operate, there are reception issues indoors and heavily obstructed areas. This is compounded as you go even higher in frequency.

“[5G] relies upon the millimeter-wave spectrum to deliver its top speeds, and it is a hard fact of physics that these higher frequencies degrade more easily, and cannot propagate as well as lower ones,” BroadbandNow policy expert, Tyler Cooper, explained to Digital Trends. “This means that 5G’s greatest potential will most likely be relegated to extremely dense urban ‘pockets.’”

Verizon’s finding this out as it rolls out its 5G network across the U.S.. In order to cover cities, the company is forced to place a mini-tower on literally every corner of every block, as we found out in April testing their 5G network and again in May using the Galaxy S10 5G. Walk a block away from a transmitter and you’re back on the LTE network.

The realities of mmWave, and good old fashioned physics, are the reasons why weather satellites and any other potential user of multi-GHz frequencies are likely safe for the foreseeable future. No new technology is going to change this. While auctions may have opened up for the frequencies close to where these satellites operate, the frequencies sold are of questionable value to wireless carriers given their poor propagation performance.

Furthermore, it is not entirely clear that a wireless carrier would either need or want to use the small portion of the bands recently sold that might interfere with satellite imagery. Spectrum licensees are expected to keep interference to a minimum as a condition of their license. For the most part, carriers have been good stewards of their networks, and there’s really no reason to expect they wouldn’t be now.

Could there be problems down the road? Sure. But we may be years if not decades off from that, and by then, we may have moved on to yet another next-generation technology. But for now, your meteorologist has nothing to fear.