I mainlined a bag of liquid vitamins — for science 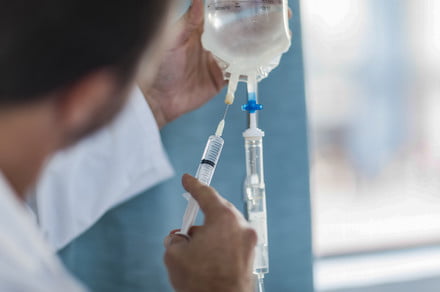 The image of an intravenous (IV) bag is a symbol of sickness, but healthy people across the country are signing up for the kind of IV drips typically saved for patients stuck in hospital beds. Known as nutrient IV therapy, the treatment entails pumping vitamins, minerals, and fluids directly into the bloodstream, bypassing the gastro-intestinal (GI) tract for what is meant to be a rush of wellness to the veins.

Its proponents say nutrient IVs can help ease stress, improve moods, and combat the common cold. Jet-setting celebrities have sworn by the energy boost they get from these vitamin-rich drips. Party crowds claim it all but cures a hangover.

But many experts are skeptical. A lack of published studies about the impact of nutrient drips on otherwise healthy individuals has relegated the treatment to the camp of alternative medicines, which are often rebuffed as pseudoscience. Critics have labeled nutrient IV therapy a modern-day snake oil and accuse its practitioners of being more interested in sales than science.

“It’s not an accident that we’re beautifully adapted to get nutrients through our GI tract.”

“There is a terrible paucity of data [to support the treatment],” Dr. David Katz, director of the Prevention Research Center at Yale University and author of one of the only peer-reviewed nutrient IV studies, told Digital Trends.

Let’s go for a drip

On a recent Thursday, while I was cruising on the mild type of hangover that makes everyday tasks marginally more tedious, I entered a nutrient IV clinic called the Biostation in a bougie resort in Boca Raton, Florida to get my first drip.

I’d signed up to receive an infusion that contained the Myers’ cocktail, a blend of calcium, magnesium, B vitamins, and vitamin C, which was first developed by physician John Myers in the early 1960s. But flooding the bloodstream with excess minerals can be dangerous. The staff would need to run a blood sample before administering the treatment to make sure it wouldn’t overwhelm my body, so they recommended I get a less complex dose of B and C vitamins instead.

“B vitamins act as catalysts in your body,” said Dany Schaper, a registered nurse and the director of clinical services at the Biostation. Schaper said many of her patients report feeling energized by B vitamins. “They’re also very good at preventing infections and for your brain functions.” Vitamin C, meanwhile, acts as an antioxidant and boost to the immune system.

The procedure for getting a nutrient drip is a lot like donating blood, just in reverse. To get the vitamins from the IV bag into my bloodstream, Schaper injected a sizable needle into a vein in my arm. A small catheter dangled from the end of the needle like a lizard’s tail. She taped the catheter to my forearm, before I was shepherded to a cushy reclining chair in a room that might be best described as “medical chic.” A cogent sense of calm stood in for a hospital room’s perennial din and commotion.

IVs are the quickest way to get medications, nutrients, and fluids into body. As opposed to injections and infusions, ingestion requires things to travel through the GI tract, where they’re processed for absorption. IV skips that step. That’s one reason why nutrient IV practitioners support the treatment — by sidestepping the GI tract, they claim nutrient IV delivers higher, purer, and more accessible concentrations of nutrients to the body.

“The problem I have with this whole space is that the marketing seems to be way out ahead of anything the science would justify.”

Granted, the system breaks down from time to time, in which case IV treatments are vital. “But there needs to be a good reason to use routes other than the GI tract,” he said.

While nutrient IV therapy is just one part of the Biostation’s offerings (the company also provides things like diagnostic testing and hormone therapy) other companies have built themselves on the foundation of the controversial procedure. A few years ago, a startup called The IV Doc launched with the promise of delivered-to-your-doorstep IV drips to treat symptoms of the flu, jet lag, and hangovers. It’s one of the more exclusive and expensive examples of biohacking to emerge in recent years. Throughout the industry, prices typically range from $100 to $400.

The Biostation’s B and C vitamin treatment ($149) takes about 45 minutes to complete. I would be hard pressed to say I felt noticeably more energized or rehydrated after the procedure. I did feel a tingling sensation as the infusion flowed into my veins. And I may have felt a little less hungover by the time I stood back up, but I suspect being poked by a needle is enough to make most people sober up a bit.

Prior to running his study, Katz hooked himself up to an IV and received his own Myer’s cocktail nutrient drip in order to get some notion of what his subjects might feel. He also doesn’t recall any drastic rush of well-being but said he could taste the influx of B vitamins. “It was a bit like a fermented sponge in the back of my mouth,” he said. “Slightly yeasty, acrid, and sour, with a bit of umami and glutamine, like you get with mushrooms.”

“Anytime there’s anything new, you’re always going to have people asking you to prove it works.”

Katz’s study, which was published in the Journal of Alternative and Complementary Medicine, found that chronic-pain patients who were given a Myers’ cocktail felt better. However, so did the patients who received a placebo.

“What little data are available would suggest that, as with so many things we do in medicine, this may make sense when it’s appropriately targeted,” Katz said. “Selective use for specific reasons in specific patients with specific outcomes in mind. But the marketing of this stuff is basically just as a pick me up, a boost, a tonic. ‘Look great, feel great.’ There’s absolutely no scientific evidence to support a benefit there.”

Katz added that, although there is conjectural reason to believe that temporarily higher nutrient levels may confer health benefits, these claims are unsubstantiated and unproven. “The problem I have with this whole space is that the marketing seems to be way out ahead of anything the science would justify,” he said.

Schaper concedes that there is controversy around how effective the treatment actually is, but insisted it is science-based and said her patients have reported benefits. “We go by the success stories we’ve seen in our patients who have received consistent therapy,” she said. “I don’t negate there are people who say it doesn’t work. I just don’t think it’s mainstream knowledge. Anytime there’s anything new, you’re always going to have people asking you to prove it works.”

Having tried the treatment, albeit once, I can’t personally endorse Schaper’s claim. I also don’t suffer from chronic pain. However, I have friends and acquaintances who in the past ritualistically visited their nearest nutrient drip clinic after nights of moderate to heavy drinking. For my part, even if money weren’t an issue, I’d rather endure a hangover than subject myself to a needle in the arm. I’ll stick to fresh juice and a greasy breakfast sandwich for now.