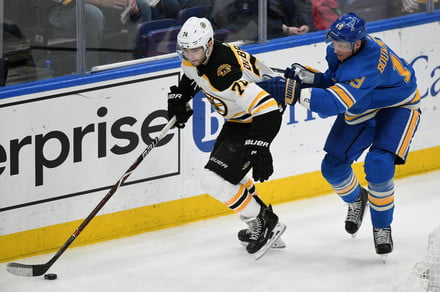 Another season of hockey is coming to an end, but the most exciting moments are yet to come. On May 27, the St. Louis Blues and the Boston Bruins will take to the ice to battle it out for the NHL’s top prize, the Stanley Cup. On one side, the come-from-behind Blues will be challenging for the Cup for the first time in 49 years, making the stakes awfully high. On the other, the Bruins hope to ride goalie Tuukka Rask’s resurgence and the Patriots and the Red Sox recent success in bringing gold back to Boston.

The best-of-seven series should be great — if you can watch it. The NHL doesn’t make it easy for you to watch the Stanley Cup online, especially if you recently ditched cable or don’t own a TV at all. Don’t sweat it. Here are a few options that’ll ensure that you don’t miss a single moment of the NHL finals. Put on your favorite sweater, sit back, and enjoy — but don’t forget your wallet. You’re going to need it.

On regular television, the Stanley Cup finals will air on NBC and NBC Sports, and the easiest option for most people is going to be subscribing to a TV streaming service that offers access to both. Thankfully, you have plenty of options to choose from. Sling TV’s Blue package, which includes both channels, is the cheapest at $15 for your first month (which should get you through the whole Stanley Cup, no problem), but YouTube TV, Hulu with Live TV, PlayStation Vue, FuboTV, and DirecTV Now should all work, too.

However, there are a couple of things to watch out for. While most of these services offer NBC Sports by default, NBC access depends on local availability. YouTube TV and Hulu offer NBC almost everywhere, while Fubo is pretty hit-or-miss. Other services fall somewhere between. If you want to watch the entire Stanley Cup series, you’ll want to check each service’s channel list for your area first.

In addition, many of these services offer free trials that run for a week or so. If you schedule your subscriptions correctly, you might be able to catch every single game without paying a cent. You’ll also want to check our guides for each service’s device compatibility list to make sure that you have the right hardware. For example, if you use your PlayStation 4 console as your streaming device, PlayStation Vue is your only option. Do your research before signing up. You’ll save yourself some money, and a bunch of future headaches.

Good news and bad news: While the NBC Sports app (and the accompanying website) will let you watch the NHL finals live in HD, and give you access to in-game highlights and post-game replays, you’ll need to sign in with an existing cable or satellite subscription to unlock the streams. That being said, you probably know someone who has a cable subscription. Hit them up for their login details, then watch away.

You can also spend $75 in Canadian currency (about $55 in US dollars) for the Rogers NHL Live Stanley Cup Playoffs pass, which gets you access to all of the NHL finals games without any blackout subscriptions. However, you’ll either need to live in Canada to use it or have a good VPN service. Here are a few of our favorites, and here’s how to set it all up.

There are plenty of Apps available to help you stay up to date, as well. The official NHL app is one of the best. And, fortunately, baseline services will give you live stats, in-game video updates, and a complete radio broadcast of every game. The app also includes tons of other features like post-game video highlights and customized game alerts.

An incredible resource for almost anything, Reddit has tons of relevant (and irrelevant) NHL information. Reddit’s loyal user base generates the site’s wealth of content, which can be equal parts blessing and curse. Once you learn how to use Reddit, you’ll find plenty of NHL related photos, videos, and even alternative streaming sites here, but be wary about where you click. Reddit hosts a lot of content that’s not NHL-related, and it’s not all safe for work.

Like the MLB, the NFL, and most other major sporting leagues, the NHL has its own streaming service. Unfortunately, it won’t do you much good during the Stanley Cup. Like those other networks, NHL.tv blacks out games that are airing on national television, and both NBC and NBC Sports are national channels.