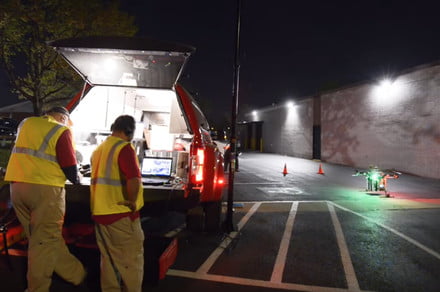 Drone technology is increasingly proving itself across a variety of industries, including the medical field where the machine’s ability to be quickly deployed and move at speed across urban areas for vital deliveries can be a life-saver.

In what’s believed to be a world first, researchers at the University of Maryland this week announced the successful transportation of a kidney for a woman needing a transplant.

“This whole thing is amazing,” the unnamed patient said. “Years ago, this was not something that you would think about.” Following the successful operation, the 44-year-old Baltimore resident was discharged from hospital on Tuesday.

A video (above) shows the kidney-carrying drone on its journey, which covered a distance of almost three miles.

Researchers at the University of Maryland Medical Center, where the operation took place, said the demonstration shows the potential of unmanned aircraft systems for providing organ deliveries that, in many cases, can be “faster, safer, and more widely available than traditional transport methods.”

The setup consists of a custom-built eight-rotor copter with backup propellers and motors and a parachute recovery system in case the aircraft fails mid-flight. It also incorporates a specially designed apparatus capable of maintaining and monitoring a viable human organ during flight.

The researchers point out how the transportation of delicate human organs is a highly complex process. Using current methods, transporting such a payload usually involves expensive chartered planes or a reliance upon commercial flights that can sometimes be delayed, ruining the viability of the organ. And, significantly, existing systems fail to reach “rural or geographically remote areas, which limits access in these areas to both organ donations and organ transplants,” suggesting drone technology has the potential to transform organ transportation on multiple levels once the machines are able to cover greater distances individually or via a delivery network.

Indeed, one of the researchers comments in the video about how the team hopes to build a fixed-wing drone with the same organ-protecting features that’s capable of covering far greater distances, perhaps similar to this machine that’s been delivering blood supplies in Rwanda.

“This history-making flight not only represents a breakthrough from a technological point of view, but provides an exemplary demonstration of how engineering expertise and ingenuity ultimately serve human needs — in this case, the need to improve the reliability and efficiency of organ delivery to hospitals conducting transplant surgery,” Darryll J. Pines of the A. James Clark School of Engineering and Nariman Farvardin, a professor of aerospace engineering, said in a release.

“As astonishing as this breakthrough is from a purely engineering point of view, there’s a larger purpose at stake. It’s ultimately not about the technology; it’s about enhancing human life.”

It's not even November yet and retailers are already unleashing early Black Friday deals. Right now you can score some
Read more

Drive safely with Amazon Alexa or Google Assistant with these accessories

We all love using our voice assistants at home and on our phones, but if you drive a lot, you
Read more

You might think we're a bit mixed up talking about Black Friday in October, but this year, things are running
Read more

Options allow users to control how much of their regular YouTube experience bleeds into YouTube Music.What you need to knowGoogle
Read more