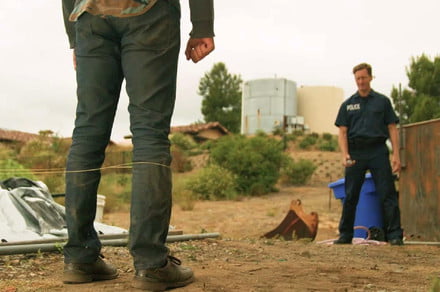 U.S. police are taking a page out of Batman’s playbook with a new grappling hook gun which fires a cord able to tie up assailants in the blink of an eye.

Called the BolaWrap, it is a pistol-sized mechanical device with built-in laser pointer, capable of shooting out an 8-foot kevlar cord at a speed of 640 feet per second. This cord, which is expelled with the force of a 9mm half-charge blank, sports two metal pellets on each side, featuring small fishhook-style barbs that attach to clothing and help it wrap round targets. It can be used to entangle suspects at a range of up to 25 feet away. The device is cartridge-based and fires one shot per cartridge. Reloading just takes a matter of seconds.

The BolaWrap is named after bolas, derived from the Spanish word for “ball.” This throwing weapon made of weights on the ends of interconnected cords was used by South American cowboys to capture cattle by tangling their legs. The updated 2019 version was developed by the Las Vegas-based company Wrap Technologies.

“This was primarily invented for noncompliant encounters that law enforcement has to deal with,” Alex Barnes, operations associate for Wrap Technologies, told Digital Trends. “It would be considered a lower use of force option. It’s not meant to replace any other devices or tools that they may have.”

The brains behind BolaWrap is a prolific American inventor named Woody Norris, best known for developing an acoustic cannon called LRAD. This device is capable of broadcasting messages or pain-inducing deterrent sounds over long distances. According to Barnes, Norris was subsequently approached by former law enforcement professionals who wanted to know if he could develop a handheld sound device, which would work along similar lines. Norris was unable to — but came up with the BolaWrap as an alternative.

“We just had our first successful deployment by Fort Worth SWAT Department,” Barnes continued. “[They] used it on a gentleman who barricaded himself inside a house with a shotgun and held his girlfriend and her mom [hostage]. They breached the building and wrapped the suspect and took him into custody.”

Sixteen police departments in the U.S. are reportedly testing the device. However, this is the first time that it has been used in action.