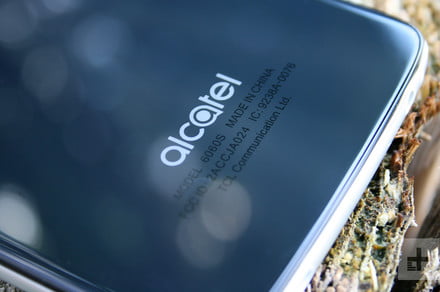 Alcatel, a budget smartphone-maker owned by TCL, is trying to make a greater push into the U.S., and to that end, it has announced a new phone — the Alcatel Avalon V. It’s available on Verizon, the first time the company has released a phone through the the carrier, though it has sold devices on other major carriers like T-Mobile and AT&T. Almost all Alcatel phones fall in the mid-range to budget category, and the Avalon V is no different.

Here’s everything you need to know about Alcatel’s new $100 phone.

There’s nothing special about the Avalon V’s design — it looks like a traditional smartphone, with thick edges surrounding the screen. On the front is a 5.34-inch display, with a 960 x 480 resolution. That means you shouldn’t expect a sharp-looking screen. The back of the phone is made of a textured, which adds a nice grip, as well as a single-lens camera, along with Alcatel and Verizon’s logos.

The device is around 0.37-inches thick, and comes in suede gray. On the bottom, there’s a MicroUSB port for charging. That’s a little disappointing to see, as USB Type-C is far more prevalent and offers faster charging. The Nokia 3.1 Plus has a Type-C charger, for example, and it costs just $160. Thankfully, there is a headphone jack on the device.

Under the hood, the Avalon V offers a Qualcomm Snapdragon 425 processor, coupled with 2GB of RAM and 16GB of storage — though if you want more storage there’s a MicroSD card slot, which supports up to 32GB of expansion. Powering it all is a 2,460mAh battery, which isn’t massive, but should get most users through a day of use. Alcatel says the phone will last 18 hours of talk time on a charge — the low screen resolution should help.

The main camera has 5 megapixels, which supports video at up to a 1,080p resolution. The front-facing camera sits in at 2-megapixels, so expect poor quality selfies.

The phone ships with Android 8.1 Oreo, and we don’t expect it to get many software updates, if any at all. It does come with Google Lens right out of the box, meaning you’ll be able to use Google’s innovative computer vision tech for object recognition, though most Android phones have this feature baked in.

The Alcatel Avalon V is now available from Verizon for $100.