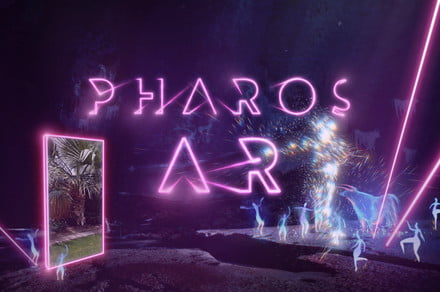 Childish Gambino wants to take you on an augmented reality journey into his universe with the launch of his new multiplayer app, Pharos AR, available on Android from today, and coming soon to iOS.

Childish Gambino’s legendary dance moves came to Google Pixel range’s Playground earlier this year, and gave fans the chance to dance and take selfies with an AR version of their hero. The experience clearly gave the This Is America performer a taste for mobile AR technology. Pharos AR is a free app that promises to take you into Childish Gambino’s personal universe, complete with his tunes playing in the background.

Boot up the app and you’ll be asked to find an open space to enter your portal to Childish Gambino’s AR world. Open it up and step through and you’ll find yourself in an augmented cave, where you’ll be asked to locate and activate a number of hidden glyphs. Once you’ve activated those glyphs, your journey through multiple worlds begins. You’ll need to move around to experience it properly, so make sure you’re in an area where you can do that easily. Thankfully, you’ll still be able to see the world around you through your device, so you don’t need to worry too much about falling over your coffee table — unless you get really into the music.

Best of all, you don’t need to explore Childish Gambino’s universe by yourself. Thanks to the app being built on Google’s ARCore, multiplayer experiences are possible, and your friends will be able to join you and interact with elements of the app simultaneously. Thanks to ARCore, you should be able to play with a friend on an iPhone while you’re on Android.

While the Pharos app certainly seems to be more of a visual and aural AR experience, and not really a fully-fledged AR video game, it’s still worth checking out if you’re a die-hard fan of Donald Glover’s alter-ego, or just curious about what the medium can offer. You can check it out on Android right now, with the iOS app coming soon. If this app has whetted your appetite for more, then you can check out our favorite AR apps for iOS and Android as well.