HomeNewsOur nearest exoplanet, Proxima b, could have a large and chilly neighbor
News

Our nearest exoplanet, Proxima b, could have a large and chilly neighbor 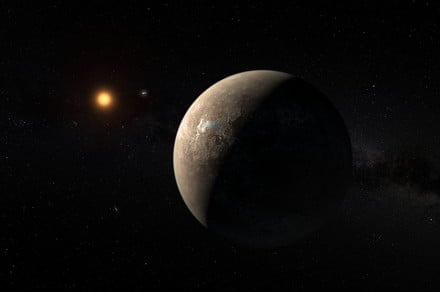 Our nearest exoplanet discovered so far is Proxima b, which orbits the star Proxima Centauri located 4.2 light-years from Earth. Orbiting a red dwarf, Proxima b sits in the habitable zone, meaning it could host liquid water on its surface, and is roughly the same size as Earth, making it an intriguing target for dreams of planetary colonization. It was previously believed that Proxima b was the only world hosted by Proxima Centauri.

But now new evidence suggests that Proxima b might have a neighbor, Proxima c. Announced at the Breakthrough Initiatives conference this week, a team of scientists led by Mario Damasso from the University of Turin, Italy, and Fabio Del Sordo from the University of Crete, Greece, observed Proxima Centauri using the High Accuracy Radial velocity Planet Searcher (HARPS) instrument. HARPS is located in the La Silla Observatory in Chile and was used to investigate the gravitational effects of orbiting planets.

The scientists observed a “wobble” of Proxima Centauri which suggests there could be a second planet in orbit around it. This wobble had been previously observed but was only of borderline significance, but in the last few years a larger dataset has been collected. Analyzing this larger dataset pushed the findings into the territory of significance.

However, Damasso and Sordo were keen to emphasize that this is only a preliminary finding. “It is only a candidate,” Damasso said during the presentation, according to Scientific American. “This is very important to underline.”

Proxima c, if it does exist, is estimated to be a super-Earth with a mass about six times that of our planet. It would orbit its star every 1900 days at 1.5 times the distance between the Earth and the Sun, meaning it is a cold and inhospitable place. This is because, as a red dwarf, Proxima Centauri is smaller and dimmer than our Sun. So its rays would barely reach Proxima c enough to heat it, making the surface temperature low.

So don’t plan a colonization trip just yet. But there could be another exoplanet nearby that we could one day visit.

The Galaxy S21 FE may not launch at Unpacked after all

How to watch the Intel Accelerated event and what to expect