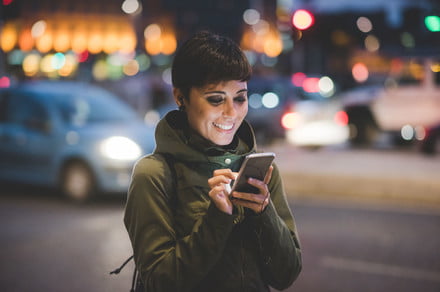 Facebook Messenger is now offering more straightforward access to its dark mode, allowing all of its users globally to ease the strain on their eyes when using the messaging app in low-light situations.

Announced on Monday, Messenger’s dark mode can be activated by tapping your profile photo in Messenger to access settings, then toggling on dark mode to switch the chat display from white to black.

Facebook actually launched dark mode for Messenger six weeks ago but decided to keep it out of the settings menu and instead offer a “fun” way of activating it. It involved doing nothing more than sending the crescent moon emoji to anyone, whether a contact, chat bot, or even yourself. Doing so prompted a “moon shower” on your smartphone screen (you can still do this, if you really must), followed by a pop-up telling users that the feature was now available.

According to Messenger’s product blog, “dark mode provides lower brightness while maintaining contrast and vibrancy,” at the same time helping to reduce glare from your smartphone screen when using the app in low light. Google has said in the past that dark mode for apps also helps to extend battery life on Android devices, which is presumably the same for iOS devices.

A number of high-profile apps have recently added a dark mode option, among them YouTube, Twitter, and Google News, with Facebook-owned WhatsApp currently testing a dark mode, too. iOS, on the other hand, offers a system-wide option in settings that lets you invert the display’s colors — you can find it by going to Settings > General > Accessibility > Display Accommodations > Invert Colors and toggling on “Smart Invert.” This has the effect of reversing all colors except on images, media, and some apps that already use dark colors.

And beyond smartphones, MacOS and Windows 10 both offer an option for darker displays, too.

Another recent addition to Messenger is a feature that lets you remove your message from a chat thread within 10 minutes of posting it, while future plans for the app could include the return of integrated chats that would allow users to converse with Messenger contacts via the main Facebook app, instead of having to flip between that and Messenger.