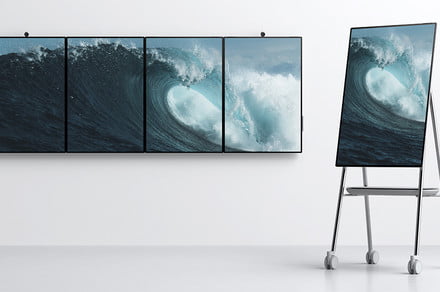 A massive 85-inch version was also teased, though it won’t be arriving until next year.

Why a new device? Jim Keane, CEO of Steelcase, explained a bit of the philosophy behind the product, noting that businesses have changed. Offices? Not so much. “Unfortunately, a lot of companies are working in spaces designed around the old way of working. They’re finding that their space is a bit of an anchor,” he said. What is a meeting room these days? What do presentations look like? And how can these two companies modernize both?

“When it’s done right, teamwork is the most powerful tool for success,” Panos Panay, chief product officer for Microsoft, told a few dozen reporters at the Steelcase headquarters in New York City. “People. That is the critical tool.” Here’s everything you need to know about the new devices.

Want to see how the Surface Hub 2S was made? Check out our exclusive inside look.

The Hub 2S will be released in June 2019 (in North America) at $9,000 for the 50.5-inch model. That includes the Surface Hub 2 Pen and Surface Hub 2 Camera accessories, but doesn’t include the Steelcase Roam easel or the APC battery pack.

The Hub 2X and the 85-inch Hub 2 probably won’t appear on the market until 2020. Microsoft hasn’t released any official details about release date or price for either.

Although Microsoft has touted some changes in the way the new Surface Hub 2 devices will work, the most impactful change will be the upgraded internal hardware.

The Hub 2S has a 50.5-inch display. That’s smaller than any previous Hub. However, with the ability to attach multiple Surface Hub 2 devices together, Microsoft offers a more expansive and customizable whiteboard system than the first-generation devices. The 3:2 display is described as “4K+” which works out to 3,820 x 2,560 resolution.The panel supports 10-bit color, refreshes at 60Hz, and supports 10-point multitouch.

Microsoft’s Surface Hub 2S will arrive with rather modest internals. The base unit has an 8th-gen Intel Core i5 processor, Intel UHD Graphics 620, 8GB of DDR4 RAM, and a 128GB solid state hard drive.

Connectivity includes one USB-A port one, USB-C/DP port, Gigabit Ethernet, HDMI, and Mini-DisplayPort. The Hub 2S also has four USB-C ports, one on each flank, dedicated to the camera or to data. These ports exist primarily so that the Surface Hub 2 Camera can be placed where it’s needed, which will become important when the rotating Hub 2X arrives next year.

While the Hub 2X has the same display as the Hub 2S, Microsoft hasn’t commented on the internals.

The 85-inch Hub 2 model is also mostly under wraps. However, we do know it’ll have a 16:9 form factor instead of the 3:2 used by smaller Hub 2 models.

Other notable features include a full-band 8-element microphone array, and front-facing stereo speakers with a bass module around back.

Microsoft put a huge amount of effort into the design of the Surface Hub 2S and 2X. One obvious result of that is the bezels, which are quite slim at just 15.5 millimeters. That’s very small for a device as large as the Hub 2S and 2X. Slim bezels were a priority because they make the device look more approach, so Microsoft slimmed down the speakers and changed their orientation so they’d fit into the limited space available.

The glass used over the display was also given attention. Microsoft sampled over 100 different etching options, ultimately landing on a surface that provides anti-glare qualities. The glass is also designed to provide some resistance when using the Surface Hub 2 Pen, with the goal of making it feel similar to using a whiteboard. Corning Gorilla Glass is used to provide durability, and the touchscreen is bonded to the glass.

Reducing the overall weight was a priority, and the new 50.5-inch model of Surface Hub 2S comes in at 61.6 pounds. Though still heavy, it’s not difficult for two people to manage, which makes installation much easier than previous versions of the Hub. Microsoft wants the Hub 2S and 2X to be usable within a few minutes of taking it out of the box, and reducing the overall size and weight of the device help makes that possible.

Read our hands-on review of the Surface Hub 2S for all the details.

One Surface Hub 2 Camera will also be included. It’s a 4K webcam with a 90-degree field of view that can record at up to 30 frames per second. It attaches magnetically to the USB-C ports on the Hub 2S and Hub 2X.

The Surface Hub 2S, which is 40 percent lighter than the original Hub, can be wheeled around on an optional Steelcase Roam stand, which is designed to make the Hub 2S portable while also providing enough resistance to keep it in place while it’s used. The Roam will be available in June, though pricing us unknown.

Last, we have the optional battery pack built by APC. It delivers up to two hours of battery life and sits in the Steelcase Roam stand. Microsoft also says the battery pack with charge to full within 90 minutes.

The Surface Hub 2S will use a new modular operating system Microsoft has been developing. It takes pieces of Windows 10, but reimagines them for new devices that might exist outside the traditional Windows ecosystem. Microsoft has referred to it as “Core OS” in the past, but the company hasn’t given a specific name to the iteration that’s used on the Surface Hub 2S.

Whatever you call it, the version of Windows 10 used by the Hub 2S (and Hub 2X) is much slimmer than that used by a PC. It’s designed to let anyone start using the basic features of the device, like the whiteboard features and Skye for Business, quickly. Users don’t have to log in to start using the Hub 2S, but if you do login, your preferences and data will be imported from the Microsoft account that you use. That data will automatically be wiped after you log out to ensure security — again, all your data is stored in Microsoft’s cloud.

Ideally, the Surface Hub 2S will be used with a corporate Microsoft Teams account, but you can use the device with a personal Microsoft account if you’re insane and purchased one for your own personal use. You can also replace the default OS with a full Windows 10 installation if you desire, though it sounds like you’ll have to purchase a Windows 10 license to do that.

You’ll need to do that if you want to run legacy apps, because the default OS only supports apps from the Microsoft Store.

And you can upgrade it

2S owners will be able to upgrade to the 2X through the use of what Microsoft calls “removable processor cartridges.” It’s said to be easily accessible and allows for simple upgrades as well as servicing over time. That may mean that the 2S and 2X will receive further hardware upgrade options of its own over the years to improve performance and capabilities.