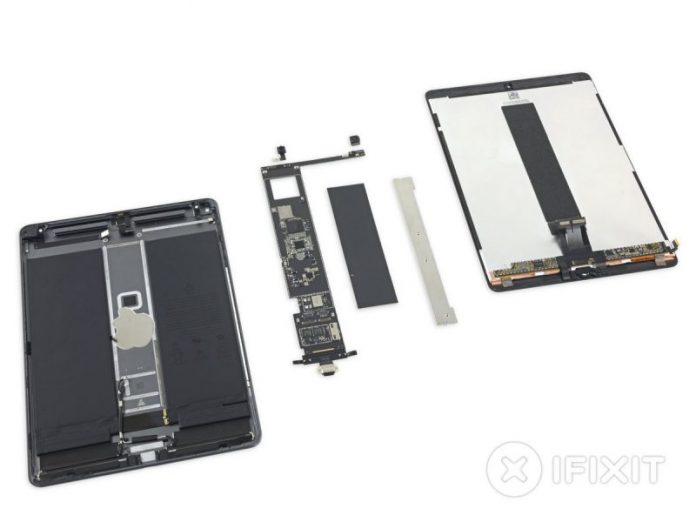 iFixit today shared a teardown of the resurrected iPad Air, confirming specs and providing some additional details about the component parts of Apple’s new middle-tier tablet, which is compatible with the first-gen Apple Pencil.

The iPad Air is identical in size and thickness to the 2017 10.5-inch iPad Pro, and just a bit lighter weight. iFixit notes that outwardly, the only design differences include a new, darker Space Gray color, the absence of a camera bump, and two speakers compared to the iPad Pro’s four. The new model number is A2152.

Opening the iPad Air up reveals an internal layout and central logic board similar to Apple’s 2017 iPad Pro range. The dual-celled 30.8 Wh battery is a little bigger than the 30.2 Wh Apple advertises on its site, and a provides a step up from the 27.6 Wh battery in the 2014 iPad Air 2. Battery life is advertised as up to 10 hours.

Meanwhile, Apple’s A12 Bionic processor is layered over 3GB of RAM, and iFixit confirms the rear camera remains at 8 megapixels.

Otherwise, as iFixit notes, the size is similar, the Pencil support is similar, and the chips are similar to the old 10.5-inch iPad Pro. However, the Air lacks the latter’s ProMotion 120 Hz technology that’s now exclusive to the 2018 11-inch and 12.9-inch iPad Pro. ProMotion automatically adjusts the display to the movement of the content, for fluid scrolling, greater responsiveness and smoother motion.

The new iPad Air is harder to take apart than the late 10.5-inch iPad Pro, since it lacks the latter’s stretch-release adhesive pull tabs and includes extra adhesive near the top of the screen. As such, iFixit gives the new iPad Air a 2/10 for repairability, the same score the new iPad mini earned in yesterday’s teardown.