Home How to How to deliver the R.I.P. to Goopy Le Grande the blue blob...
How to

How to deliver the R.I.P. to Goopy Le Grande the blue blob in Cuphead 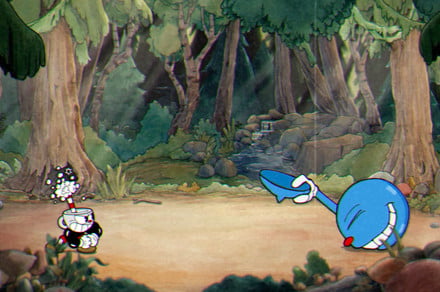 By now, it’s well-known that Cuphead is a fairly challenging game. The sidescrolling boss rush bonanza with a beautiful 1930s cartoons style made waves when it launched in 2017 on Xbox One and PC. Now the stylish platformer starring Cuphead and his brother Mugman is available on Nintendo Switch. Right from the start, Cuphead is pretty unforgiving. One of, if not the first, boss you square off against is proof of that. Good old Goopy Le Grande definitely fits the level title “Ruse of an Ooze.” If you’re having trouble putting the final nail in Goopy’s coffin, our guide will help you get to know this forest creature who most certainly is not a Slime from Dragon Quest.

Right when you cross the bridge in Inkwell Isle One, head north to the odd, multi-colored tree where Goopy dwells. Despite being a cute blob we’d like to use as a pillow, Goopy wants to smash Cuphead’s face in.

Like all Cuphead bosses, Goopy has multiple phases to contend with. In the first phase, Goopy is merely a small blob who hops around the screen. Watch carefully to get a feel for how far he jumps before crashing back down. Sometimes Goopy jumps high with short range, and other times he jumps lower with a longer range. This is key to avoiding damage from above. Generally, you can stick near the sides of the screen without fear of getting hit. You will, however, have to dash from time to time if you can tell Goopy will land on the side of the screen.

The other move Goopy has in his first phase is that he turns himself into a giant boxing glove. This move is heavily choreographed, as you’ll see Goopy stretch backwards before ballooning out. This move covers about half the screen. Depending on where you’re at in relation to Goopy, you may just have to move to the side of the screen and keep wailing on him. But if there’s no room to get out of the attack’s reach, you have to dash over him before he lunges forward.

After a few rounds of alternating between jumping and swinging at you, Goopy will become enraged.

In Goopy’s second phase, he does pretty much the same thing. Except this time, you cannot hang around the sides of the screen. Goopy is very large now. Stick to the ground and make ample use of your dash. You’ll need to in order to avoid getting hit.

Goopy’s other attack in his second phase is much easier to avoid than in his first phase. He’ll conjure a red boxing glove and wind up with authority. All you need to do to avoid it is duck. Goopy cannot hit you while crouched, and you can keep firing bullets into him as he takes his shot.

Following a few rounds of this, Goopy is destroyed by a tombstone with Goopy’s face on it (it’s all very meta).

Even with Goopy dead and gone, the fight goes on. You have to destroy the tombstone now, even though it’s etched on it that Goopy is already resting in peace. The third phase is all about quick reflexes. You have to shoot upwards at Goopy’s face on the tombstone. This means it helps to try and stick with it as it shuffles about the background.

Best weapons and charms for Goopy

As it’s early in the game, you won’t have a ton of coins to purchase items from Porkrind’s Emporium (the caravan shop on the map). But if you’re having trouble defeating Goopy with the Peashooter (the default shot), the Chaser will help you out a lot. With the Chaser, you don’t need to worry about aiming. It automatically sends projectiles at your target for the cost of decreased damage. The Chaser makes the third phase, in particular, much easier as you don’t have to remain in harm’s way under the tombstone while shooting. You’ll have enough coins out of the gate to buy the Chaser, too.

If you play one of the two run and gun levels in Isle One, you can find enough coins to purchase a Charm, too. If staying alive is a problem, you can get the Heart charm, which adds one hit point to your health while only slightly weakening your damage. But the best charm for Goopy is the Smoke Bomb, which makes Cuphead or Mugman invincible while dodging. Essentially you can be more aggressive when fighting Goopy with Smoke Bomb, allowing you to breeze through all three of the creature’s phases without worrying so much about perfect dodges.

After nearly a decade of hitching rides to space with rockets from other countries, NASA will be sending two astronauts
Read more
How to

Enjoy the in-car apps you need without the hassle.Android Auto went through a makeover in 2019, and the new-look platform
Read more
How to

How to set up a Messenger Room in Facebook Messenger

With the launch of Messenger Rooms, you can now participate in video calls from the comfort of your smartphone and without any extra apps.If you’re using WhatsApp, Instagram, or Messenger, you can now make a virtual room and invite your friends in a matter of seconds. This saves you the trouble of installing extra apps like Zoom.Today we’re going to look at how to set up a Messenger Room in Messenger.How to set up a Messenger Room in Messenger – The easy wayThe only real pre-requisite here is having the latest version of Facebook Messenger installed on your phone from the Google Play Store. Download it here.Step 1Tap on the People tab at the bottom on the Messenger app and choose to Create a RoomAt the bottom center of the screen, you will have the option of Share Link. Tap on it.With the Who Can Join, you can also control who joins the Messenger Room if you wish to keep the room exclusive to friends, family, etc.Step 2Copy the link in the box and paste it to the group or people you wish to share it with. They will also need to have the Messenger app installed and on the latest version of the app for it to work best.You can share the link via any app or medium you wish, but whoever has access to the link can join your room, unless you modify the Who Can Join settings in Step 1.From here, you just wait for your friends to join and carry out your business. When you feel the room has met its purpose, you can close the room by tapping on the X button at the top right of the room.Leave will mean that the room will still be there to return to for anyone who has the link. End Room will close the room and make the link invalid. This means you’ll have to make a new room if you do End Room here.We also wrote a guide on how to start a Messenger Room from WhatsApp. The feature will soon go live on Instagram globally, so be sure to look out for that as well!If you’ve used Messenger rooms, let us know what you think of it in the comments section below!
Read more