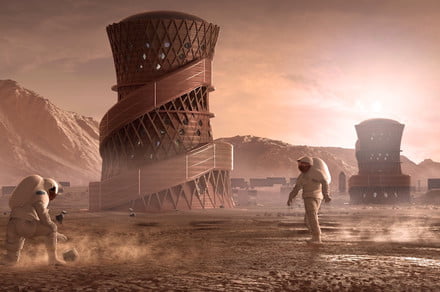 It’s expensive to ship things through space, so when the first space colonists reach the moon or Mars, they will want to carry as little cargo as possible. That poses a challenge: If they need to limit the amount of resources they bring, what will colonists use to build their shelters?

One idea is to live in networks of lava tubes, which would protect them from the extreme conditions found at the surface. Another is to build their shelter using resources found along the way.

To that end, NASA has selected three finalists in the latest stage of its 3D-Printed Habitat Challenge, an ongoing competition to design sustainable shelters suitable for the first space colonists. The goal is to build the structures out of things found on-site so that missions can limit their cargo.

Since the challenged was launched in 2015, it has gone through three phases with multiple levels each. The substages required teams to develop and demonstrate designs in fields like architectural modeling, material development, and construction.

The most recent stage, complete virtual construction, saw 11 teams develop full-scale renderings using modeling software. They were tasked with describing their decisions in an accompanying video. NASA assessed the entries based on aspects like feasibility, scalability, functionality, and aesthetic.

The first place award of the most recent stage went to Team SEArch+/Apis Cor (pictured at top), whose twisting smokestack structure is designed for continuous reinforcement. Ports situated on the top and sides of the cylindrical shelter maximize natural lighting. Watch the team’s virtual video here.

Team Zopherus (above) won second place for its shelter that is designed to be constructed by an autonomous roving printer. The rover is designed to complete the shelter in stages, completing one section before moving on to the next.

Team Mars Incubator (below) brought home the third-place prize for its modular design. The structure includes four separate quarters connected by walkways. One of the rooms is specifically designed for growing plants. The team consists of artists and engineers.

These three teams will share a $100,000 prize purse. So far, more than $3.1 million has been awarded to teams through the competition.

The finalists will now compete for $800,000 in a stage that requires them to 3D print scale models of their designs. A head-to-head print-off will draw the 3D-Printed Habitat Challenge to a close in May. The event will take place in Peoria, Illinois.