China’s Chang’e 4 lunar mission: See Yutu on the far side of the moon 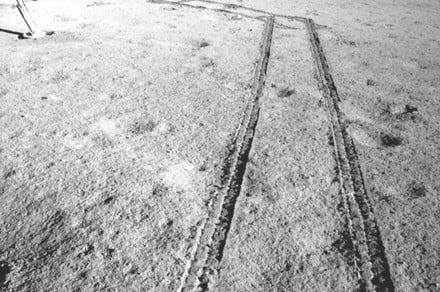 The tracks in the lunar soil left by the Yutu-2 rover, with the Chang’e 4 lander visible to the left. CLEP/CNSA

China’s Chang’e 4 lander touched down on the far side of the moon at the start of the year, and has been exploring this rarely investigated part of the lunar landscape. It has already made findings that the lunar nights are colder than expected, and is now investigating the geology and mineralogy of the top layer of moon rock.

As the mission progresses, the China Lunar Exploration Project and China National Space Administration have released a series of images of the lander and its rover, Yutu 2, in action. The images show areas of the Von Kármán crater and were captured using the panoramic camera on board the Yutu 2 rover as it explores near the landing site, named “Statio Tianhe.”

The shadow of the Chang’e 4 lander is visible in this image, as are its tracks. CLEP/CNSA

A lunar day is long, lasting around 30 Earth days, so the rover and the lander have managed four lunar days and nights. The craft has now entered a sleep mode for the fifth lunar night. It goes into periodic hibernation mode to protect its systems, as it is hard to survive in the cold temperatures. The original aim of the mission was to achieve four lunar days and nights, so if the lander and rover are able to survive longer, this will be a bonus for the mission.

Craters in the lunar surface, captured by Chang’e 4. CLEP/CNSA

The Yutu 2 rover has now traveled 178.9 meters, or 587 feet, according to the Chinese state news agency Xinhua. The rover is scheduled to awaken on April 28, and the lander on April 29, according to the Lunar Exploration and Space Program Center of the China National Space Administration.

The terrain of the Von Kármán crater, as captured by Chang’e 4. CLEP/CNSA


Facebook
Twitter
Pinterest
WhatsApp
Previous articleSee the crater blasted into an asteroid by a Japanese spacecraft
Next articleToday only! Save $60 on Anker Soundcore’s BEST Bluetooth speaker