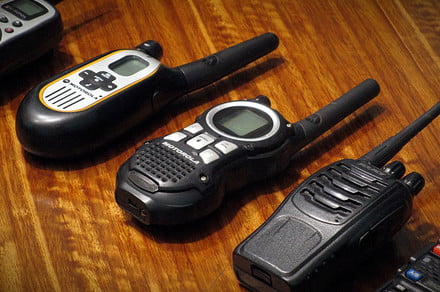 The shrinking of cell phones, the advent of texting, and the tremendous ascension of the smartphone may have consigned the humble walkie-talkie to the bin in a world of texts, social media, and instant messaging apps. But even if the hardware has become irrelevant for most, the ethos behind the walkie-talkie has seen a renaissance in recent years. Firing off quick voice messages is faster than typing on a screen, and in some cases more convenient. Apple Watches on WatchOS 5 now come with a Walkie-Talkie mode, but what about your phone? Turns out there’s an Android and iOS app for that too.

It’s important to note that none of these apps are “true” walkie-talkies. Real walkie-talkies use radio waves to transmit messages, while most of these apps will use your LTE connection to send messages. That means that they won’t be able to message real walkie-talkies, as phones simply lack the hardware to do so — with a few, heavily-specialized exceptions. Still, there’s no better way to fire off a quick message to a friend’s phone. Here are the best walkie-talkie apps for iOS and Android.

Zello is one of the most well-known walkie-talkie apps on the market, and it’s easy to see why when you dive in. You can either talk directly with individual people, or you can create a group channel for your friend or work group. If you’re feeling particularly social, you can even join a specialized channel to chat about whatever you want, from cats to local areas. Voice messages will be played out immediately if the app is open, or played later when the recipient has time. You can also send text messages, images, or alerts. One very useful feature is the ability to set a volume level for each individual user — which is especially handy in group channel talks.

Useful if you want Zello’s strong walkie-talkie functionality, but also a more traditional chat interface, Voxer is a great alternative walkie-talkie app for everyone. It’s built more like a traditional instant messaging app, and even includes a threaded view, text chat, and support for sending images. Unfortunately there’s no option to broadcast out your messages into channels like Zello, but you can still create group chats. Basic access is free, but you’ll need to upgrade to a Pro account for the best features, including a hands-free mode, voice-to-text transcription, the ability to recall sent messages, and more. Pro access costs $3 a month, or $30 for a year.

A much simpler app than the previous entries on this list, Two Way is the walkie-talkie app of choice for the extrovert. There’s no option to pick-and-choose individual contacts, and you can’t send text messages or images. Instead, you get the ability to pick a specific geographical area (local or national) and immediately broadcast within that whole area for anyone else to hear. If you love starting conversations with strangers, then this is an excellent way to do so. Thankfully, if you want a more private conversation you can head into the Key Pad feature and choose a channel to chat in instead. The huge selection of channel numbers should mean you won’t have to share with anyone else.

The option for the minimalist, Walkie-talkie — Communication is simply a walkie-talkie app. That’s it. There’s no contacts list, no text messaging, and certainly no image sending. Instead, you and a friend download the app, set the channel to the same number, then turn on the walkie-talkie to send immediate voice messages. You can change the color of the background, and there’s a website version (that we couldn’t get to work). Honestly, there’s not much to it other than that. But it works, and it’s quirky in its simplicity. Unfortunately for Android users, it’s iOS-only.

Here’s one that’s a little different from the rest. While other apps are shackled by their need for a data connection, Walkietooth uses a variety of other connections instead, using a device-to-device connection with Bluetooth or Wi-Fi, or a connection through a shared Wi-Fi network. You can share a voice connection, or bump it up to video — meaning an old device could be used as a baby monitor. While Bluetooth and other options won’t be as good in a house or urban area, it could be the best choice for motorcyclists out on the road where there’s no data connection, but also little to interfere with or block a Bluetooth connection. Definitely a niche choice, but one that’s worth considering. Unfortunately for iPhone-lovers, it’s Android-only.