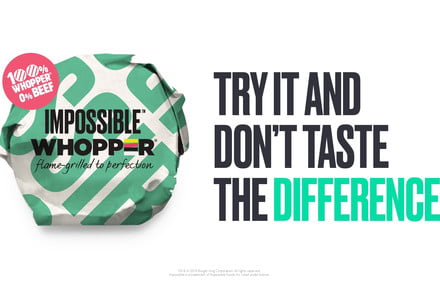 When you think of Burger King, you probably think of the juicy beef patty that comes with the Whopper. Now imagine that exact same thing, but without any of the meat. That’s what Burger King is promising with the new Impossible Whopper. The fast-food chain announced the arrival of the meatless burger at some of its restaurants on April 1, but it’s no April Fools’ Day prank. It really will be coming to Burger King locations soon.

To start, the Impossible Whopper will make its debut in St. Louis, Missouri. Fifty-nine Burger King locations within the city and its surrounding area will add the Impossible Whopper to their menus. It will have everything you’d expect out of the standard Whopper: sliced tomatoes, lettuce, mayonnaise, ketchup, pickles, onions, a sesame seed bun. The only thing different is instead of a beef patty, it’s the plant-based Impossible burger.

If you’re unfamiliar with the Impossible burger, it’s a meat-alternative designed by Impossible Foods, a company founded by Patrick O. Brown, M.D., Ph.D. The Professor Emeritus of Biochemistry at Stanford University, and a former Howard Hughes Medical Institute investigator developed the plant-based product in an effort to create an edible alternative to standard meat that often produces a sizable environmental footprint.

If all goes well, the company plans to introduce the meatless burger at all 7,200 locations across the United States, according to the New York Times. However, Burger King is calling the Impossible Whopper a “limited-time offer.” So if you’re hankering for a Whopper that won’t require you to eat meat, you might want to make the trip to St. Louis and get a bite of one of the burgers while you have the opportunity.