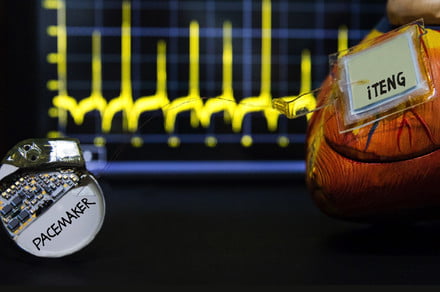 Pacemakers have a problem — and that’s not something you want to hear about a medical device which literally helps a person’s heart to continue to beat normally. The problem, simply, is that they rely on bulky batteries, which have to be swapped out at regular intervals due to their short lifespans.

Fortunately, researchers from China and the U.S. may have come up with a solution. They have developed an alternative battery-free pacemaker which gathers its required electricity from the energy of heartbeats. While not yet ready to be implanted into humans, it was recently tested successfully in pigs. This is significant because the pig hearts used in the study are approximately the same size as human hearts.

“Our symbiotic cardiac pacemaker (SPM), powered by an iTENG (implantable triboelectric nanogenerator), is the first self-powered battery-free pacemaker [to be] fully implanted in adult pigs,” Zhou Li, a professor in the School of Nanoscience and Technology at the University of Chinese Academy of Sciences, told Digital Trends. “SPM is inspired by the biological symbiosis phenomenon involving interaction between different organisms living in close physical association — such as nitrogen-fixing bacteria with leguminous plants — which is a fancy and interesting idea. The SPM converts biomechanical energy from the heart beating to electricity for powering the pacing module [as it sends] pulses. The abnormal heart can be corrected by these pulses, and the recovered heart will provide more energy for SPM.”

The recent demonstration was significant because it showed that the energy output from the iTENG is enough to reach (and exceed) the threshold needed for a commercial medical human pacemaker. This makes the idea of a self-powering “implant for life” not only exciting but also feasible.

“There is still a long way to go [before this can be] used in humans,” Li said. “Some technical challenges are needed to be solved. To meet the minimally invasive implantation process and better comfort long-term operation in vivo, it is necessary to develop an iTENG [that is] small in size, high energy density, [has] efficient fixation with bio-tissue, and long-term biosafety. It depends on developments of material science, micro and nano-fabrication technologies, and electronic techniques.”

The work isn’t just promising for cardiac pacemakers, however. Li suggested that similar self-powering tech could also be used for alternatives to other battery-powered implant medical devices. These could include neural stimulators, muscle stimulators, devices for tissue repair and engineering, drug delivery systems, and more.

It could additionally be used for consumer devices such as wearables, which currently require charging. “I think that electronic equipment is entering a self-powered era,” he said.

A paper describing the work was recently published in the journal Nature Communications.